Terry has been reading The Final Virus by Carol J Hedges 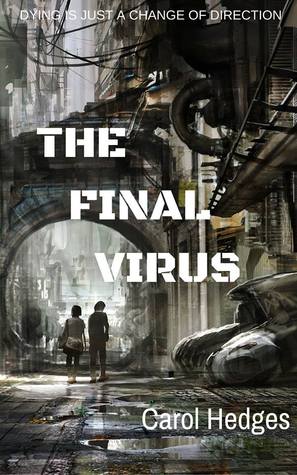 I’ve read Carol Hedges’ three Victorian murder mysteries and loved them; even though I am not a fan of YA books I love the whole post apocalyptic genre, so was keen to give this a go.

In this future world all countries are one, with one president, and peace reigns. This follows a cybercrash in which the computer systems of the world were wiped out within a couple of hours, and also the effects of climate change which has altered the entire landscape of the planet.

The story centres around Will and Amber. Will is popular, clever and sought after; Amber is a non-conformist with strange intuitive capabilities. Oddly attracted to each other, they come together to investigate the truth behind the death of Will’s father and possible government conspiracies.

As always, Carol Hedges’ characters are immediately real and three dimensional, the dialogue sharp, realistic and often funny; there’s a definite element of dry humour throughout this book that I liked very much. However, I would have liked to know much more detail about how the current situation came to be, and how the people now live, how the world had changed as a whole; at the beginning I couldn’t quite work out what was going on, when and where it was supposed to be taking place, etc, though some of my questions were answered fairly soon (by Mr Neots, the boring teacher, a great character!), and more later.

The Final Virus is a good mixture of the sci-fi thriller/adventure and believable relationships between the teenage main characters, and I think YA fans of the genre will enjoy this series very much.