Terry has been reading Crossing Bedlam by Charles Yallowitz 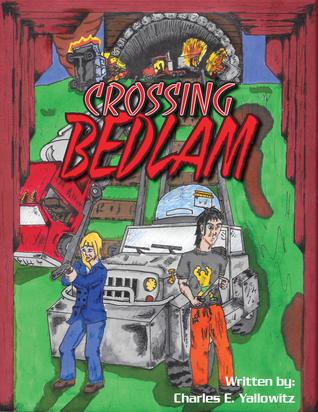 This is a post-apocalyptic dark comedy. The USA has become the Shattered States and Cassidy’s mission is to drive across America to scatter her mother’s ashes over the Golden Gate Bridge, as per her dying wish. To help her on her way in these dangerous times, she enlists the help of serial killer Lloyd.

Crossing Bedlam is an amusingly written book with lots of good one liners and observations that I appreciated very much, and some nifty characterisation, but for me the combination of a post-apocalyptic world and comedy didn’t mix well enough to be a real page turner. I could have done with a little more background in the first instance; I felt with this one that I’d walked into the middle of a film. The only other negative for me: the way the narrator kept referring to Cassidy as ‘the blonde’.   Why not just ‘she’ or ‘her’? Archaic at best, sexist at worst ~ I didn’t notice any of the men being referred to as ‘the brunette’ or ‘the redhead’…!

If a slightly off-the-wall comedy dystopian novel is your thing, you’ll probably love this, as it’s clever in many ways; I imagine if I was thirty years younger, male and American I might have enjoyed it a lot more! It’s a book I can imagine going down well with guys who like playing Xbox games about these type of scenarios.