Luccia has been reading Palomino Sky by Jan Ruth 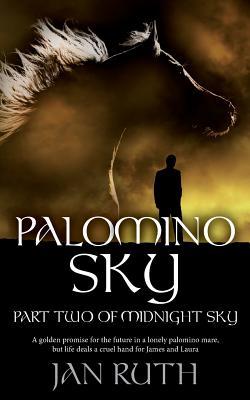 Palomino Sky is the sequel to Midnight Sky, both novels are named after horses on the farm where James lives and carries out his equestrian business.

Palomino Sky is named after another new horse. Liz (James’ bossy and independent sister) calls a ‘showy palomino’. I know very little about horses, and one of the joys of reading these two novels is learning more about them, like discovering that palomino is a coat color in horses, consisting of a gold coat and white mane and tail. Rhian, one of the staff says ‘Jamie reckons she’s a natural at hooking up, a joiner.’ James, the horse whisperer, needs horses like that to help recover the horses he heals from trauma and injury. Palomino is also a metaphor for Laura’s role in the novel. She will have to heal, or ‘join’ James in the second part of the novel.

Palomino Sky moves the story started in Midnight Sky in a much darker way, because there are various dramatic and violent events, which will seriously change the course of all their lives, especially in the case of Laura and James.

In book one, James helped Laura during a traumatic moment in her life, including her break up with Simon, but in book two, it’s Laura who will have to heal James from real physical injury and trauma. I can say no more without including a spoiler.

Maggie and Pete have set up a bed and breakfast to supplement their meagre income at Hafod House, the running of which brings some humorous relief to the dramatic action. I liked the way Maggie’s role as older and wiser sister is heightened, and she actually takes some very important and risky steps to help Laura with her personal issues with the men in her life.

On the other hand, Jess’s role as troublesome teenager, develops into a dangerous troublemaker. A violent boyfriend, and a new crush on James’s twenty-year-old American son, will lead to many unfortunate incidents throughout the novel, including an almost tragic event, which will rock their lives.