Today’s second tem review is from Olga, she blogs at http://www.authortranslatorolga.com

Olga has been reading Going Against Type by Sharon Black 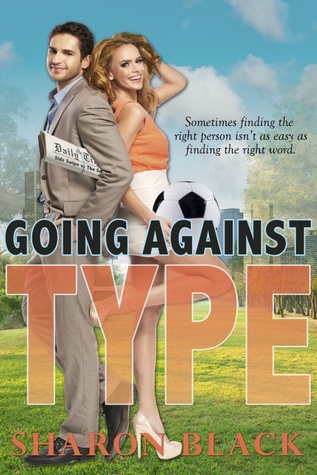 Going Against Type by Sharon Black. A quirky romance that turns expectations on their heads

I am reviewing this novel as part of Rosie’s Book Review Team and I thank her and the author for providing me with a complimentary copy in exchange for an honest review.

Going Against Type is a romantic comedy that turns many conventions and expectations on their heads. The female protagonist, Charlotte, who goes by Charlie, is a sports journalist who’s always been mad about sport and wanted to be a footballer when she was younger. She still exercises regularly and loves watching and talking about sports more than anything. She’s just out of a traumatic relationship where she sacrificed her sense of self and personality for a man who never appreciated it, and she’s not keen on repeating the same mistake again. Derry, the male protagonist, is also a journalist, but he’s an expert on clothes, fashion, the arts and celebrities in general. They work for rival newspapers and somehow end up writing anonymous features where they take opposing points of views about everything. Their columns and their bickering on the page become popular, but what neither expects is the fact that opposites attract and despite their personal baggage and their different approaches to life they fall for each other, without knowing they are journalistic rivals.

The story is told in the third person, mostly from Charlie’s point of view. She is younger and less confident, still trying to establish herself as a serious sports journalist. Not only her interest in sports, but also her lack of self-awareness, dislike of fashion and shopping, and concentration in her career marks her as different to most female protagonist of what has been called chick-lit. She’s insecure, and her relationship with her friends is strong, but she’s also family-oriented, focused on her work and refuses to drop everything when a handsome man just happens to turn up. Derry is also not your usual eye-candy. Although in appearance he is a Don Juan who goes out with as many models and flashy women as he can, we later discover he’s also had bad experiences, and he’s mostly straight in his dealings with Charlie (apart from keeping from her his writing identity). Despite his reputation, if anything Derry seems a bit too good to be true (and reminded me of some comments about men in romantic novels written by women being a female fantasy rather than real men. Although that’s part of the appeal).

Not being a big sports fan in general, I was more interested in Derry’s line of work than in Charlie’s (apart from fashion, that is not my thing either), and I empathised with her doubts as to what they had in common. On the surface at least, it seems a case of opposites attract, although we do realise later in the novel that they share similar emotional experiences. Perhaps a more detailed account of their dates and time spent with each other would give the readers a better sense of their relationship and where the attraction between the two comes from. They are both likeable characters, the content of their columns —that is shared in the novel— is funny and witty, and some of their exchanges (on paper more than live) remind one of the good old classic comedies, like Katherine Hepburn and Spencer Tracy’s films (although to my mind not quite as sharp). They do go to watch one of their movies at some point in the novel, that I thought it was a nice touch.

If you want a very light romantic read, set in gorgeous Dublin, with a background in the world of journalism, quick-witted and fun, with no erotica or daring sex scenes, I recommend you this novel. It’s perfect to pick up anybody’s spirit.