Today’s team review is from Cathy she blogs at http://betweenthelinesbookblog.wordpress.com/

Cathy has been reading Marred by Sue Coletta 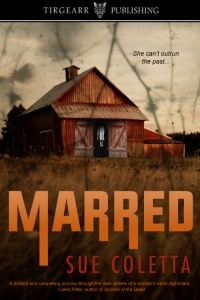 Three years ago Sage and Niko Quintano’s lives were changed irrevocably after a horrific and brutal attack on Sage by a serial killer who also injured Niko. They left Boston where Niko was a homicide detective and relocated to a small New Hampshire town. Niko is now the Sheriff of Grafton County and he and Sage live under the radar, their location a closely guarded secret. Or so they believe.

Niko and Sage are both still suffering emotionally as well as physically from the trauma. Sage is keeping her deepest feelings buried, finding it impossible to talk about certain details of the attack. She feels a victim’s unjustified shame for not fighting her attacker, trying to save her unborn baby. Niko also fails to disclose his feelings and as a result Sage and Niko’s marriage is not what it once was, leaving Sage feeling vulnerable and easily hurt. When Niko and his deputy, Frankie Capanelli, land a homicide case with haunting similarities to the Boston serial killer coupled with Sage’s sister going missing, it seems Sage’s past is returning to torment her, and once again she is in mortal danger.

There’s no doubting the amount of research that’s gone into this story. The vivid, disturbing and grisly descriptions of crime scenes and the forensic details are chillingly detailed. A well structured, dark and suspenseful plot, which makes it easy to get caught up in the narrative and be drawn to Sage. She’s been through some of the worst things that could happen to a woman and now there’s no end in sight.

I enjoyed Frankie’s unconventionality and personality, a gruff exterior with a soft(ish) centre which she likes to keep well hidden. The writing and plot kept a good pace with unexpected twists, the main characters well drawn. The story is told in the first person from Sage’s perspective with the rest in the third person.

Personally I found some of the narrative/dialogue a little choppy, the flow could have been smoother in places, but that said, Marred is a really good debut.