Today’s second team review is from Cathy, she blogs at http://betweenthelinesbookblog.wordpress.com

Cathy has been reading Hunt For The Enemy by Rob Sinclair 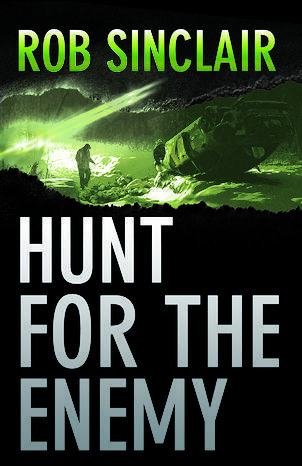 Carl Logan has succeeded in rescuing Angela Grainger and they are both on the run. Hunted by the FBS, the CIA and the JIA there is no-one Carl can trust. He is more alone than ever before and needs to get himself and Angela out of Russia. The fact that Carl’s identification, bank accounts and his record with the JIA have all been completely wiped is a blessing in disguise, leaving no obvious trail for anyone to follow.

Peter Winter has taken over Mackie’s position in the JIA. It’s a position he has wanted badly but perhaps not under the present circumstances and especially while Mackie’s killer is on the loose. Peter is aware other members of the JIA are unimpressed with his promotion and think he isn’t up to the job. But Peter is more perceptive than they give him credit for and he knows not everyone are as they seem. He is determined to find out the truth of what happened and who is responsible.

The start of the story incorporates quite a few flashback chapters and although they filled in a lot of Logan’s past, showing how his character has been developed through his training, I initially found the back and forth between years and locations slightly confusing and it kind of stopped me from being immediately engaged with the story. Mainly, I think, because at that point I didn’t know how the incidents related to the whole plot and couldn’t remember if some of the characters were mentioned before. It just felt a little choppy. That said, the story more than lived up to expectations and I enjoyed it very much. Once things became clearer and the various story lines began to intertwine, I settled into it and was able to see how Carl’s past experiences influence the present and relate to the predicament he finds himself in.

Carl Logan is still the all action hero, hard and tough, but there’s another, slightly softer, side showing. This story goes deeper into Carl’s mind and personality and he begins to understand how and why the events that made him question his belief in certain people have led him to this point. The are no rules anymore, anything goes and Carl will do whatever it takes to survive, root out the corruption and find out the whole truth.

A well thought through, fast paced and complex plot, full of action, suspense and thrills, not to mention interesting twists. An excellent ending which I didn’t see coming. The writing is as descriptive and vivid as ever with well developed characters and a great story arc.