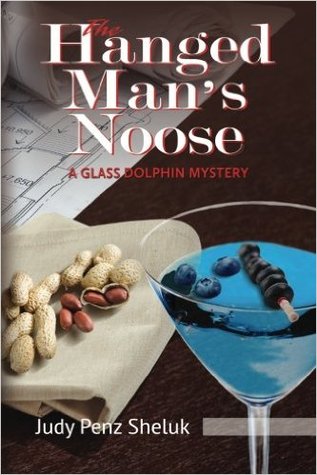 Hanged Man’s Noose is the author’ debut book in A Glass Dolphin Mystery series. This is a classical cozy, in that it takes place in a colorful small town, and has lots compelling characters and no gore to gum it up.

Emily Garland, a writer for Urban Living Publications, is given an assignment by her editor, Michelle Ellis, to become the managing editor of a niche magazine based in Lount’s Landing, a town named after a 19th century Canadian traitor and a tourist attraction with its variety of small shops lining Main Street. The job was offered on the basis of Emily’s knowledge of Garrett Stonehaven, a residential housing tycoon, whose company has recently purchased an old school in Lount’s Landing for development into a mega-box store. Emily has a deep hatred for Stonehaven, based on her exposé of a toxic waste scandal linked to his company, one which could not be legally proven. Her mother’s death is linked to Stonehaven as well, although how is not revealed until later.

Lount’s Landing is richly developed, with a population having difficult relationships and hiding secrets. Emily is immediately attracted to the handsome Johnny Porter, chairman of the Main Street Merchants Association, who introduces her around and tells her about the owner of her rental unit, Camilla Mortimer-Gilroy. Camilla is the widow of a supposedly rich man, who died by drowning in a snowmobile accident. Left penniless, she has turned their mansion into a deluxe bed and breakfast.

Chapter 3 changes viewpoint to the second main character, Arabella Carpenter, owner of a new antiques store on Main Street, The Glass Dolphin. Arabella is divorced from a beguiling rascal of a husband, who encouraged her to open the store. Arabella meets Emily just before the grand opening and their point of intersection is Emily’s knowledge of Stonehaven and Arabella’s distrust of Stonehaven’s plan for the school.

Another viewpoint is introduced in the middle of Chapter 4, with Garrett Stonehaven, as he plans how to gain the townspeople’s interest and convince them of the wisdom of his development.

Emily prepares for her first edition of Inside the Landing by having breakfast at the Sunrise Café, where she and other townspeople congregate for breakfast and a side of gossip about the plans for Lount’s Landing. Here she meets the owner of the café, Gloria Motoziuk, and various other of Sheluk’s characters. Here also first death takes place: Carter Dixon, irascible owner of a sporting goods store, collapses and dies from anaphylactic shock. He is allergic to peanuts, although none were in any of the food on the menu, and he always carried his Epipen in his pocket. Mysteriously, it was not there that morning.

Emily is immediately suspicious, and the reader is swept along as Emily uncovers the complex web binding and polarizing the townspeople with respect to Stonehaven’s plans. As more deaths occur, Emily – and the reader – can’t decide whom to suspect. The one person Emily trusts is the outspoken Arabella, despite the fact Arabella will clearly do just about anything to preserve the integrity of the town’s historic Main Street. Together they search for the killer(s – I can’t give this away) and uncover childhood relationships that lead to murder.

This is a really good first outing for the author. The plot is complicated, and I had to read carefully and do a little backtracking to follow all of the red herrings and remember how each character is related to the others, but I liked them all because they are richly drawn and vibrant. I liked the point-counterpoint between Emily and Arabella and would have preferred the viewpoints confined to just the two women; alternatively, a fuller development of Stonehaven, with his own chapter or two, would have helped me to get into his skin, as I did with Emily and Arabella.

One other observation: I think the resolution of the mystery was a touch contrived. It works in tidying up all the threads of the story, but it was a bit puzzling at first read. I won’t say more because I would give away too much.

All in all, this was a very satisfying read, and I do recommend The Hanged Man’s Noose to lovers of picturesque small town mysteries and well-limned characters.