Today’s team review is from Crystin, she blogs at https://crystinlgoodwin.wordpress.com/

Crystin has been reading The Five Elements by Scott Marlowe 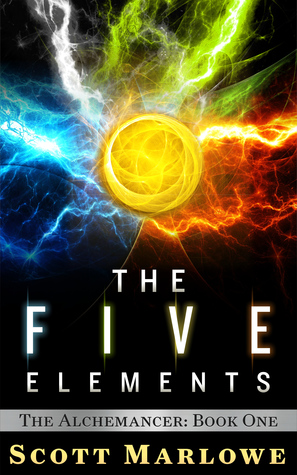 Shanna and Aaron are best friends who are separated when a violent and catastrophic force of nature destroys their home. Each embark on an adventure filled with adversity and unexpected luck in an attempt to set their world back to rights. However, their paths are vastly different, and only one is right …

The Five Elements is a fantasy novel filled with sorcery, alchemy, witchcraft, and good old-fashioned sword fights. While the book is well written with great detail, I occasionally felt it had too much detail. Granted, I thought the same thing when reading Zelazny and Tolkien.

I liked the pacing of the story: not too fast, but still full of events and plot twists galore. The characters were a little hit and miss though: I found Ensel Rhe fascinating, Aaron to be mildly interesting … but I didn’t like Shanna’s character progression. I didn’t give a hoot about most of the other characters – which may or may not be a bad thing.

The part that I disliked most? It doesn’t end well. There’s too much death and destruction and loss – which makes for a very real and vivid dark fantasy. Although it didn’t have the type of ending I prefer, it was an incredibly well written ending. I just prefer the fairy tale ‘and they all lived happily ever after’ sort of stories.

I’d recommend this to fans of fantasy – especially rich, detailed fantasy – and those who prefer a darker, grittier tale.