Barb has been reading Raining Embers by Jessica Dall 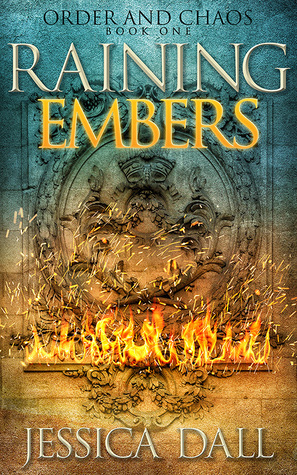 I was intrigued to read in the blurb for Raining Embers that the two main characters have grown up with challenging disabilities. Fantasy is a favorite genre of mine, especially epic fantasy. But after Lord of the Rings defined it, after series from the Belgariad to Harry Potter refined it, and after Star Wars took it into space, it’s got to be a challenge to extend the tropes into new territory. So how did Raining Embers score on the standard elements of epic fantasy?

Jessica Dall is the author of such novels as Off Book and The Copper Witch along with a number of short stories that have appeared in both literary magazines and anthologies. When not writing, she works as an editor and creative writing teacher in Washington, DC.

After wondering how main characters with disabilities would fit with the standard tropes of the genre, I was a little disappointed to hear that when Brier and Palmer discovered that they were the reincarnated gods of Chaos and Order, their disabilities disappeared. Not only did I not really understand the reason for their disabilities in the first place, but I felt that the author had missed an opportunity to give depth to characters who were otherwise basically gods by showing how they dealt with their disabilities. The god of Order who is virtually omniscient but who can only hear one sound at a time? The goddess of Chaos who controls destruction and death itself but who is prostrated by the smell of every living thing rotting toward inevitable death? Two all-powerful beings who were only around because they managed to hijack the bodies of children who died? Wouldn’t all that provide some dark, interesting, convoluted character development opportunities?

There were some intriguing supporting characters such as Cerise Filou, the beautiful, brave, and often evil shapechanger. But the love triangle setup with Brier, Palmer, and her childhood friend/fiance Nico felt forced, like a deus ex machina reason for postponing action. And somehow I didn’t feel a strong empathy for any of the characters. I get that their situation was dire, but their absolute and unwavering preoccupation with themselves was like being trapped in a never-ending Asperger’s support group with signs on the walls to remind that Shit just got real people.

Overall, Raining Embers is a solid, beautifully edited novel that tells a good story but misses chances to tell a great one. The action starts very slowly, and although it picks up about half way through, there are elements such as the forced love triangle that seem to serve no purpose other than to delay taking actions. But the author does introduce potential storylines for support characters as well as a convincing backstory, while nicely closing the story arc on this first book in the series. I’d give Raining Embers three and a half stars and look forward to other books by this author.

***I received this book for free from the publisher or author in exchange for an honest review. This does not affect my opinion of the book or the content of my review.***