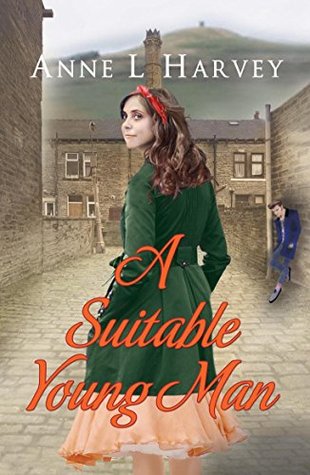 I enjoyed reading this, and was very impressed by some parts. It’s a family saga, set in the working class Bolton area in the 1950s. Kathy is a secretary who wants to be a journalist in a time when women aren’t supposed to want careers. She gets herself a ‘suitable’ boyfriend, but finds herself falling in love with Nick Roberts, teddy boy, of whom her family disapproves.

The story is told mostly through the eyes of Kathy and Nick, in alternating chapters, with a few snapshots from the viewpoint of Joyce, Nick’s 16 year old sister. It’s obvious that the author has written about a time and circumstances that she knows well, and what struck me most was how very different those times were, though only 60 years ago, as I read about the poor families with the tin bath tub hanging on the back of the door, the way in which women of that class had nothing to look forward to but the lifestyle of their mothers. In other ways, though, history repeats itself; the Teddy Boys of Anne Harvey’s novel could have been the hippies of the 1960s, the punks of the 1970s, the Emos and Goths of later.

I loved the portrayal of the Saturday night dances (how tame when compared to young people’s entertainment of later decades!), the families sitting round listening to the radio as the only form of entertainment, the cinema as an exciting place to go to, to hear the new music (and those travel film opening features; I think they were still being shown when I was a teenager!). Also how Nick’s mother, at only around 40, was already an old woman. Nick’s a lovely character, I liked him a lot.

Later in the book there is a death that I found heartrending, I thought this bit was very well done without laying it on too thickly. I enjoyed this novel more and more as it went on. At times I found the dialogue a little contrived; I felt too much emphasis was put on sticking in yet another bit of nostalgia about the period, or giving information, rather than concentrating on making the dialogue realistic, but this doesn’t occur very often.

The story ended as I expected it to, but I was delighted to see a nice little twist in the epilogue, and I look forward to reading the next book, ‘Bittersweet’. If your preference is for these sort of ‘warts and all’, post war family dramas, I imagine you will love this; I’d definitely recommend it.