Cathy has been reading The Sickness by Dylan J Morgan. 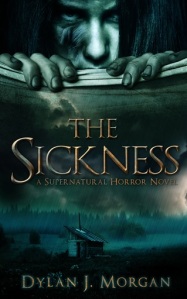 In the small village of Nash Grahame Harris is woken by noises outside his farmhouse.  What he discovers as he goes to investigate is beyond comprehension and is the last thing he ever sees before dying horrifically.

The only reason for James Harris’ continued existence, and going through the ordeal that is his life, is his Goth teenage daughter, Ruth. he normally has her to stay at weekends but she turns up at his house unexpectedly one Thursday, which breaches his custody agreement. He’s more than glad to see her, all the same. When he receives a phone call from his estranged sister, Laura, informing him of the murder of their parents, long-buried and distressing emotions begin to surface. After taking his daughter to school the next morning, James very reluctantly begins his journey to Nash to attend the funeral.

Unbeknownst to James Ruth had skipped school and was even now back at his house. Curious to know why her dad didn’t want company on the trip, or her to be anywhere near the village, and why he never talked about his boyhood, Ruth decides on a course of action that will have repercussions beyond imagining.

“With a sigh she placed the drink carefully on the coffee table and hurried down the corridor, pausing outside his bedroom door. Ruth glanced down, pursed her lips, and wondered if this was such a good idea. She’s never snooped around in her father’s bedroom before, and a twinge of guilt held her at the doorway for a moment. Shaking her head, Ruth tried the handle and her heart picked up rhythm as the lock released and the door moved in the frame.

She took a deep breath, stepped into the bedroom, and hoped her father would forgive her if he ever found out.”

The horror is evident from the start of the book, beginning as it does with someone raising a corpse from the grave. The depressing and sombre atmosphere of Nash as the backdrop for the story sets the scene for what is to come. The identity of the culprit, and reason for the bringing corpses back to life to take revenge, is the mysterious thread running through the dark and gruesome story.

Facts about James’ traumatic childhood and teenage years are revealed slowly, by degrees, until I couldn’t help but think his parents got their just deserts. I liked James and Ruth very much, their relationship and love for each other is wonderful, so well defined. The rest of the characters, although unsympathetic and impossible to like, are very well drawn and so easy to picture, even if that picture isn’t a very pleasant one. Dylan Morgan is a very descriptive and skilful writer. I love how the suspense builds steadily right up to the intense and completely unexpected ending. Great cover, too.