Today’s team second team review is from Noelle, she blogs at http://saylingaway.wordpress.com

Noelle has been reading Maelstrom by Francis Guenette 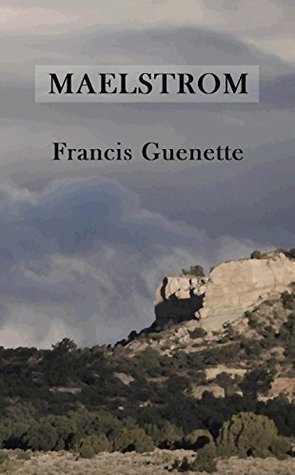 Maelstrom: turbulence, tumult, turmoil, chaos, confusion, upheaval. A perfect title for this book, which is based on a concept from her mother, but given form and substance by the author. Ms. Guenette’s mother worked on Maelstrom off and on for most of her life, leaving a two thousand page manuscript when she died. When Ms. Guenette found it, she was determined to get it published, making it hers in the process of winnowing, rewriting, expanding characters and giving it life and shape.

Maelstrom is also a perfect example of the journey of the archetypal hero found in world mythologies, as described by Joseph Campbell in his seminal work, The Hero with a Thousand Faces. The hero starts in the ordinary world and receives a call to adventure; along the way he or she must face tasks and trials either alone, or with assistance. If the hero survives, he or she may obtain the gift of important self-knowledge, which may be used to improve the world.

The hero in Maestrom is Myhetta, a young man also called the Breed, because of his mixed heritage. Born of the rape of his mother by the all-powerful Bert Calder, Sheriff of the isolated mountain town of Haddon, Myhetta and his mother Ahya, escape to the estate of Rafael Destino, head of Destino Enterprises. Rafael and Ahya become lovers, and Rafael raises Myhetta as his own son, schooled to take over his money, power and influence.

Rafael is now dying, but is still determined to ruin the man who married his sister Serena, then killed her; he is pushing Myhetta to exact his revenge. Myhetta is an imperfect hero: he is tormented by being his adopted father’s instrument of revenge and he drinks to excess and womanizes. But he has a generous heart and an intelligent mind.

As the story opens, the reader is immediately drawn into the world ruled by the Sheriff: Calder shoots and kills a young woman on Suicide Ridge, a murder that Myhetta witnesses. She is killed because she came to Haddon to investigate the rumors of corruption, and with Myhetta’s help had come too close to the truth.

Haddon is populated with colorful, well-drawn characters, whose lives are tragically influenced by the evil of Sheriff Calder, who has raped, maimed and murdered anyone challenging his absolute authority. His reign of terror is abetted by the mayor of Haddon, Amos Thatcher; Thatcher’s first wife was Serena Destino, sister of Rafael and she gave him a son, Casey, before her death.

Calder is the center of the maelstrom. One by one, the people he has harmed are helped by Myhetta, thus bringing down the wrath of Calder and stoking his determination to eliminate the Breed in a deniable way…when he can reach him. Myhetta is safe behind the gates and perimeter of the Casa Destino estate and is only vulnerable when he ventures into town.

An element of the supernatural touches the story in the person of Casey, who as Rafael’s nephew, has the gift of “second sight” – the ability to see the past and the future of those to whom he is emotionally attached. After Casey and his friends steal liquor from a local store, he is taught a lesson by Sheriff Calder at the behest of his father – he is beaten and the palms of his hands are each cut with deep X. In his physical agony and with the emotional impact that his own father had this done, Casey is inextricably drawn to Myhetta as a source of comfort and protection, For his safety, Myhetta brings Casey to stay at Casa Destino as Rafael’s ward, fulfilling Rafael’s wish to bring nephew into the fold. An additional interest to this reader was the existence of a family of wolves Myhetta has trained. They play an important role in search and rescue and in the protection of Myhetta, Casey, and those closest to them.

True to the hero myth, as Myhetta helps the people of Haddon, he gradually comes to accept his role as the new Patron of Destino Enterprises and the requirement that he care for the people who make it run.

If there is a fault in this saga, it lies with the number of characters and their complicated interrelationships. It took me a while to figure them all out, but once done, their stories wove into an intricate web of lies, deceit, gossip, and danger. Most of them are strongly written, although I found one of them, Casey’s mother and wife of Mayor Thatcher, to be a mass of contradictions, not all of which were clear.

This is a fairy long novel, but superbly written by an excellent wordsmith whose talent clearly derives from that of her mother – so there is a ghost who accompanies the book! Once I had the characters straightened out, I couldn’t put the book down and read deep into the night. I recommend it highly. An excellent and compelling read.