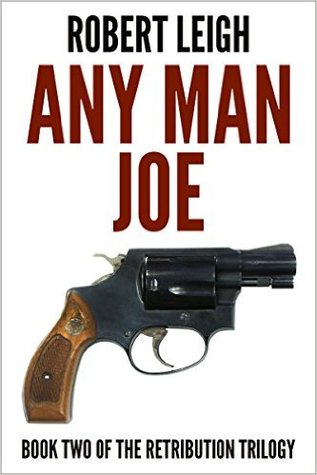 Any Man Joe by Robert Leigh

Excellent, excellent – I thoroughly enjoyed this!

Joe is a quiet living young man who lives on a rough council estate in London, just minding his own business – until he becomes unwillingly mixed up in the world of the estate’s drug dealers. Pretty soon, he finds himself in handcuffs… that’s all I will say about the plot, or I’ll spoil it.

Robert Leigh has done it again, the same as he did in Kill Line – he’s made me like and root for a mass murderer. No, I’m not weird – read it, and you’ll understand! I still feel sad thinking about him.

Parts of this book reminded me of that televisual piece of excellence, The Wire – if you liked that, you’ll love this. Of course, this is South London, not Baltimore, but I imagine the drug dealing hierarchy runs much the same. The story is told in alternating points of view, between Joe and DI Edwards, the officer originally in charge of the case. It highlights police corruption and social problems, too – all very real.

The book is SO well structured, which is one of the elements that makes it work so well, with the story unravelling gradually, as we move from hospital to police custody to flashbacks back on the estate. The dialogue and the characterisations of the dealers, the junkie who befriends Joe, the blinkered cops, are spot on. The action is cleverly executed, too, making me able to visualise clearly what was happening – this is a hard thing to do, I’ve read so many that don’t work. The suspense is superbly suspenseful (!), as is the build up of Joe’s frustrated outbursts. A classy writer, this!

This is the second novel in Leigh’s Retribution Trilogy – I can’t wait to read the third.