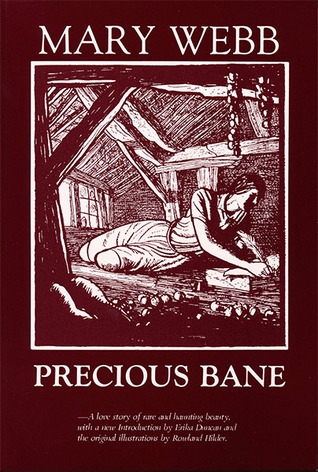 Prue Sarn is an unlikely heroine, born with a facial disfiguration which the Fates have dictated will deny her love. But Prue has strength far beyond her handicap, and this woman, suspected of witchcraft by her fellow townspeople, rises above them all through an all-encompassing sweetness of spirit.

Precious Bane is also the story of Gideon, Prue’s doomed brother, equally strong-willed, but with other motives. Determined to defeat the poverty of their farm, he devotes all his energies to making money. His only diversion from this ambition, he abandons her for the stronger drive of his money lust.

And finally, it is the story of Kester Woodseaves, whose steady love for all created things leads him to resist people’s cruelty toward nature and each other, and whose love for Prue Saen enables him to discern her natural and rach other, and whose love for Prue Sarn enables him to discern her natural loveliness beneath her blighted appearance.
Rebecca West, a contemporary of Mary Webb, called her, simply, “a genius,” and G. K. Chesterton, another contemporary, asserted: “the light in the stories . . . is a light not shining on the things but through them.”

Critic Hilda Addison summed up Precious Bane: “The book opens with one of those simple sentences which haunt the mind until the curiosity has been satisfied . . . It strikes a note which never fails throughout; it opens with a beauty which is justified to the last sentence.”

When the book was first published in 1926 in America, the New York Times Book Review predicted: ” on some bookshelves, we feel sure, Precious Bane will find almost a hallowed place.”

Find this at Amazon.co.uk or Amazon.com