Today’s team review comes from Olga, she blogs at http://olganm.wordpress.com 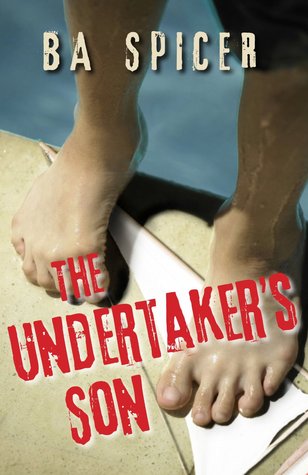 I am reviewing this book as part of Rosie’s Book Review Team. Thanks to Rosie and to the author for providing a free copy of the book in exchange for an honest review.

The book intrigued me because of the description and the setting. We all seem to expect crime, and crime novels, to be set in big cities, but when evil hides in a small, picturesque and peaceful town, it seems worse. As if evil had no place in such environment. It’s true that it’s perhaps more difficult to hide in a small and idyllic French town, but some manage to hide in plain sight.

The novel, written in the third person, is told from the point of view of a large number of characters, from the “evil” character hinted at in the description, the undertaker’s son of the title, Claude, to Patrice, a young student who ends up being more central to the plot than it seems at first. The author allows us to peer into the heads of her characters, and this is sometimes a very agreeable experience (like in the case of Martha Burton, the British divorcee out to create a new life for herself in France, who despite disappointments in love, is fairly happy), and at others, an utterly terrifying one. Apart from Claude, who has no redeeming qualities, and Patrice, who is a nice young man without any shades, all the rest of the characters are all too human, they hesitate, they are morally ambiguous at times, and even downright immoral. Felix Dumas, the crook, is utterly dislikeable, but even he has some redeeming qualities (he does not understand his son, but seems to love him, and he tells Claude not to take drastic measures. He does not want anyone killed.) And Angeline… It’s a credit to the author that by allowing us into the minds of her characters, we might not agree with what they do, the secrets they keep, or their reasons and justifications, but we understand them. Well, that is, except for Claude.

Claude reminded me of the main character in Peeping Tom due to his fascination with death. But, in contrast with Mark Lewis, the protagonist of Peeping Tom, who is a victim of his father’s psychological experiments, Claude is unknowable. We share his memories and see his attachment to Felix, but he operates outside of our conceptions of right and wrong. He’s a psychopath, but from what we get to see of him, he uses his interest and fascination with death in a utilitarian way, and turns it into a business, rather than being compelled to kill. He plans his jobs with military precision, and seems alien to humankind, functioning at a different level. This is not the typical serial killer whose neighbours would say he seemed so “normal”. He is nothing if not extraordinary. A character very difficult to forget that makes us question the limits of humanity and conscience.

The plot is intriguing but the writing ebbs and flows through certain moments, like parties, planting a tree, and the fleeting memories of a dementing old-man, that help us get a vivid sense of the town and its people, and make us care for the fate of its inhabitants. For the duration of the book we become privileged town dwellers and get to know everybody. This is not a frantically paced thriller, but a novel that shares in the more relaxed pace of its setting, and that’s perhaps what makes it more chilling.

The ending is satisfying (perhaps everything works out too well and that’s the least realistic aspect of the novel) and reassuring. I look forward to reading more novels by B A Spicer.

Four and a half stars.