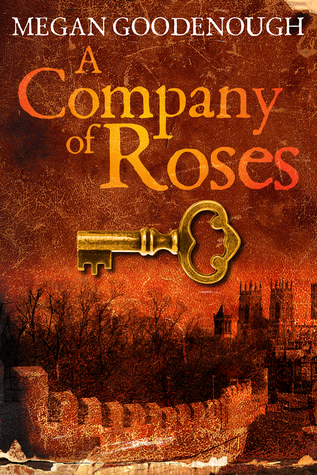 A Company of Roses by Megan Goodenough

A mystery-thriller with a historical twist—wealthy young artist Lacey disappears after a boozy night out, and leaves friend Cas with cryptic clues to find both her and an Elizabethan treasure that holds the key to a dark conspiracy. Cas soon finds out, though, that she is not the only person looking for Lacey; enter Reuben, attractive undercover government agent who pretends to be an insurance investigator, accompanying Cas as she races around the country.

This novel started promisingly, with a nice bit of Tudor intrigue followed by the girls’ night out on which Lacey goes missing, as observed by Reuben. Cas is a most engaging character throughout, and I think she would appeal very much to other twenty-something girls just out of university and embarking on life in the working world, while partying hard—I liked her, she was very well drawn, and Reuben appealed to me straight away, too; I could see why Cas was so taken by him.

The book is very current, with some acute observations, like the description of girls shopping for engagement rings with their boyfriends as ‘sharp toothed trophy hunting demons’ (I loved that!), and Grandma’s advice that ‘it’s not people’s right to know things about you, even if they think it’s their right to ask’—so true! People familiar with the cities in the book will like reading about them, and the plot is a great idea, too. I’m afraid it didn’t quite work for me, though.

Many thrilling government conspiracy stories are perhaps a little far-fetched (though, indeed, who knows?), but even in fantasy the activities of fictional characters need to be feasible, and Cas’s almost immediate sussing out of the beyond cryptic clues and charging around the country followed by Reuben was, on many occasions, too unlikely to make me able to suspend my disbelief. Then there were instances like her buying a single ticket to York instead of a return, even though they were the same price and she needed to get back – this was explained as a hangover from her wacky student travelling days when she never knew where life might take her, but a ticket from Brighton to York must cost something in the region of £100, and Cas was just an ordinary working girl. Or Reuben leaping across over a bridge to stop a fight in a neighbouring carriage, then charging back in time catch their own train, even though it was moving off as he was running up the stairs (the doors would be closed!). If these sort of things don’t bother you, though, you’ll enjoy it.

I think a good, professional edit would iron out the daft/unlikely, and the few errors (things like something being ‘five foot away’ – it’s ‘feet’, ‘foot’ is the singular), and also it’s a bit messy, with some oddly or clumsily phrased sentences and narrative that needs tidying up. I believe this is Ms Goodenough’s debut novel; she clearly has a good imagination and storytelling skill, and this is a fair start. I wish her all the best with her writing career.