Today’s book review comes from Judith, she blogs at http://judithbarrowblog.com/ 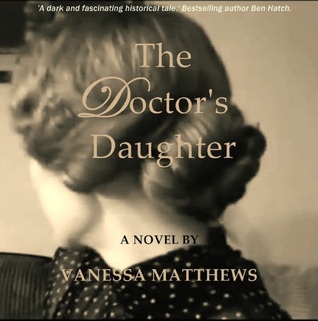 Considering it is a disturbing novel, with themes of manipulation and emotional and mental cruelty it might seem odd to read that I enjoyed The Doctor’s Daughter. Yet I did; because I liked the writing style of Vanessa Matthews, because it is so sensitively written, and because of the compelling plot. Although I found it a little slow to begin (there is a lot of introspective internal dialogue) I soon became used to this and was more and more engrossed as the book progressed.

Mainly set in Vienna, in the early part of the last century, the story is populated by good rounded characters. Virtually isolated within her family, the protagonist, Marta Rosenblit, is complex yet with a certain naivety. Exposed to outside society but only within her father’s control as his protégé, and only as long as she doesn’t challenge his expertise and opinions. Even so she holds a dream of being able to connect and make her way in this most patriarchal of worlds. Elise Saloman, a recently qualified paediatrician, who becomes Marta’s friend, is shown as a foil for the protagonist, being a strong-willed, resolute character. But even so Elise has secrets of her own – one that is ultimately revealed to have connections with Marta. Arnold Rosenblit is portrayed as a controlling, self-centred and formidable character with no empathy for Marta and no time for anyone who doesn’t share his views on the female psyche. He could have been shown as a flat, unchanging character, but Matthews manages to show another layer to him by revealing his vulnerability in his relationship with his institutionalised wife. Leopold Kaposi, a physician and long-time friend of the family, is portrayed as self-obsessed, manipulative. As an antagonist he is the only character I felt didn’t grow throughout the story. But that was okay; he was a good one to dislike and therefore I felt justified as his motivations were gradually revealed.

The book is mainly written as third person point of view,  from Marta’s perspective. We are given access to her internal dialogue, which reveals the many facets of her given personality  and also gives the readers her thoughts on the other players in her world. This is  interspersed with the occasional viewpoint of other characters. The dialogue is excellent and remains true to each the characters all the way through the book.

There is little obvious intervention to describe the world the characters inhabit, yet throughout the novel the atmospheric narrative it is a subtle and integral part of the story and portrays a setting the reader can feel part of.

As I said at the beginning this is a dark and sometimes disturbing read, with many disquieting themes. It’s a challenge. But I think the reader will be surprised by the denouement. I know I was. And I have no hesitation in recommending this novel by Vanessa Matthews. She is a tremendously good writer and I look forward to reading more of her in the future.