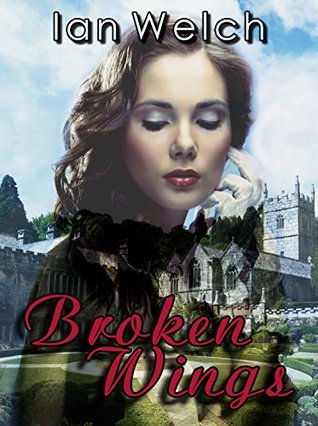 First, I would like to thank Rosie Amber and Ian Welch for providing me this book so I may bring you this review.
Broken Wings has a huge plot-line that spans over many years. I’ll put my thoughts down in a different way than I normally do by giving the gist of the story:
Lawrence Cranston, the eldest son of a poor family who live in Portsmouth in England just after WW2, has died in mysterious explosion. The father, Edward, drinks. The mother, Isabel, is struggling to keep a roof over the family’s head. Edward becomes terminally ill. The scene is set for him to make some monumental changes that will provide for the family when he dies and will also settle an old score. After his death, and following a certain incident, Isabel makes drastic changes for herself and the rest of the family. They move to Los Angeles but trouble follows them in many guises. Eventually Isabel moves back to England to face her past.
I’ve said no more than is in the book description on Amazon.

Okay … this is a storyline that covers many years and it’s an interesting one. It’s easy to see that there has been a lot of research carried out to get the setting correct and give a sense of place, both to the houses and the towns and cities that the characters move around in. And there are enough descriptions dropped in to also give a sense of the era.
My main problem is that there is no even pace within the book; sometimes there is a great deal of time spent on scenes that, in my opinion, could be shorter (such as when Isabel and Abby meet Selwyn Sainsbury. And then there are other scenes that I wanted to be longer, to be explored, to get an inner depth (such as when Edward is diagnosed with his illness and struggles to come to terms with it). Yet overall I thought there was too much crammed in. And I felt as though the author realised this as the phrase, ‘weeks flew by’, time flew by,’ etc. was constantly reiterated. I was just getting into a certain part of the plot when, as a reader I was forced to follow another storyline. Sometimes I felt that parts of the novel read as a synopsis.

Told from an omniscient third party point of view, it was interesting to see the viewpoints of the main characters Isabel and Edward with the odd chapters designated to the children, Frank, Phoebe, and Abby.

Although the frustrations that both Isabel and Edward struggle with is revealed in the inner dialogue of both, I wanted more from both of them; Edward’s fear as a man terminally ill, Isabel’s worry about how she would cope without him as a person, rather than cheerfully planning which part of Eleanor and Selwyn Sainsbury’s house she would live in.
I did feel that, sometimes, the dialogue of all the characters was quite stilted and there was often a hint of an American vernacular. But my main problem with the dialogue was with that of the youngest daughter, Abby. At the beginning of the book it was stated she was three but soon became five (and I re-read this part because I thought I’d missed time moving on – but no). Even so, either age, she spoke more as an adult than a child and this both irritated and made her unbelievable.

So … my final thoughts
This is a wonderful story but it feels rushed. There is far more to be explored with all the characters to give them all depth, to give them backgrounds that show the reader why they act as they do. To my mind it’s at least two books, maybe even a trilogy. There is certainly enough action and plot to take it over more than one book

The book would be stronger if more evenly paced

Perhaps another edit would iron out some of the minor formatting, repetition, grammar and punctuation problems?

And, lastly, I wasn’t keen on the title, Broken Wings. The phrase wasn’t brought in until the end of the story. The strength of this plot deserves a stronger title. But this might be me … I might have missed something.

Anyway, give it a try; I’d be interested to see what other readers think.

This book is available on: