E.L. chose to read and review The Cunning Woman’s Cup by Sue Hewitt 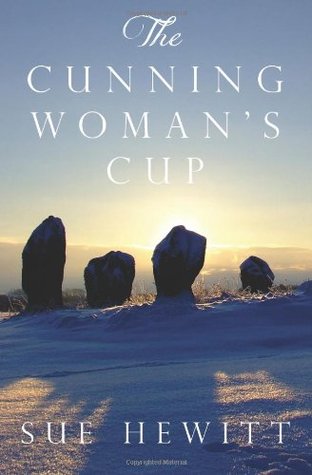 The Cunning Woman’s Cup is such a rich and layered read, I hardly know where to start. In any other hands, the complex structure and stories within stories might have lacked cohesion but Sue Hewitt asserts herself from the onset as a writer who is in complete control of her craft. I was in her thrall from the very first page.

The story, on the surface, is a simple one – the tale of two elderly women, Alice and Margaret, who meet by chance and forge an enduring friendship. The story ripples out from the two women, however, and incorporates other stories of people whose lives interconnect with theirs. The story is set mainly in the village of Duddo in Northumberland, where a stone circle overlooks the village, lending a mysterious and spiritual atmosphere. The ‘cup’ of the title is unearthed which leads to the past impinging on the present and setting in motion dramatic changes.

Alice and Margaret are polar opposites. Alice has been widowed after a long and happy marriage and has spent her life caring for others. She is a traditional woman and fears ideas that challenge her Christian way of life. Margaret, by contrast, is an independent, spiky retired professor, who never married, choosing instead to travel extensively. One of the most enjoyable and life affirming aspects of the novel is the fact that Alice is in her late 60s and Margaret in her 80s but they still live full and exciting lives. There is not even a whiff of a stereotypical elderly person in this book, Hewitt’s senior citizens are all full of passion and zest for life.

The novel concerns itself with both spiritual and everyday issues. Alice’s traditional views are shaken by the arrival in the village of Avian, a psychic healer. Many people in Duddo, including Alice’s late husband hold pagan beliefs, celebrating the land and nature as represented by the stone circle. I found Hewitt’s exploration of grief and the afterlife to be particularly poignant.

At the same time, Hewitt highlights many modern dilemmas, not least the way in which elderly people can often be ignored and lonely. She also depicts the differences between rural and city life and how seeming success can bring hollow rewards as people try to buy happiness. We also see how young people can become lost without guidance and purpose. Hewitt touches on several very relevant social issues in a way that is both realistic and moving.

The structure of the novel is very interesting and clearly demonstrates Hewitt’s skill as a writer. Each chapter begins with a first person account from Mordwand, an ancient Celt who is the ‘Cunning Woman’ of the title. She survives being aborted and abandoned before being taken in by the old medicine woman who performed the abortion. Ironically, she then takes over from the woman as an abortionist and healer. Mordwand’s angry spirit lives on amongst the stones with terrible consequences for one family in particular. After the short account from Mordwand, Hewitt switches to 3rd person narrative, which allows her to develop all of the characters in her novel equally. In addition to this, some of the story is also told via letters sent between Alice and Margaret.

I loved this novel and found myself totally immersed in the life of Duddo, so much so I felt almost bereft when I finished it. It is a warm, deceptively cosy read which snakes its way into the reader’s heart, raising some provocative philosophical questions.

When Alice McCleish’s gardener Brian unearths an object of great archaeological significance deep under the compost heap it is not only Alice and her burgeoning friendship with Margaret Allerton, retired Professor of Anthropology, that are affected: the family, friends and neighbours of Alice, who people the narrative, are also touched by subsequent events. Alice and Margaret find themselves questioning long-held beliefs about the material and spiritual world that surrounds them; and both women find their lives transformed unalterably by their newfound companionship. Serendipity puts Alice’s nearest neighbour, the troubled Violet Turnbull, in touch with the enigmatic Avian Tyler, whose mystical ‘gift’ offers Violet a promise of liberation. All the while an echoing voice from long, long ago hints at the history of the locality dominated by the standing stone circle that bestrides the skyline above the small community of Duddo, while charting the harrowing story that reveals the provenance of the artefacts found beneath the compost heap.