Today’s team review comes from Alison she blogs at alisonwilliamswriting.wordpress.com 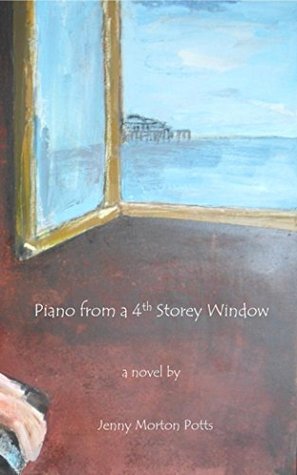 ‘Piano from a Fourth Storey Window’ by Jenny Morton Potts

Set in Brighton, this lovely, beautifully written, at times funny novel tells the story of the romance between eccentric bookshop owner Lawrence Fyre and teacher and ex-Jehovah’s Witness Marin Strang.

The title of this novel is from a song lyric – ‘love is a piano dropped from a fourth storey window and you were in the wrong place at the wrong time.’ The quirky title is spot on for a quirky read although Marin is the right place at the right time when she meets Lawrence.

Their relationship is the backbone of this story and it’s unusual because they are unusual. Their relationship is touching in its honesty, in its realistic ups and downs, its misunderstandings and its genuine warmth. I like Lawrence and Marin immensely, and the parts of the book that gave detail and insight into their pasts were, for me, the most enjoyable aspects of this novel. Lawrence’s relationship with his sister is brilliantly portrayed and is really touching to read, as is Marin’s strained relationship with her father.

There were, however, some aspects that I was less keen on. Lawrence’s imaginary audience, the ‘ladies and gentlemen’, didn’t really work for me and neither did the imaginary servant ‘Lolita’. The sections involving these characters were rather drawn out and didn’t add much to the story – it’s quite a long novel and I felt that these sections were unnecessary and could have been cut.

I also felt that some of the minor characters weren’t fleshed out enough and verged on the stereotypical.

The author also switched tenses a great deal. I wasn’t sure if this was stylistic or a mistake – if it was stylistic, then it really didn’t work for me.

That aside, this was, on the whole, an enjoyable read – and one that I’d recommend.