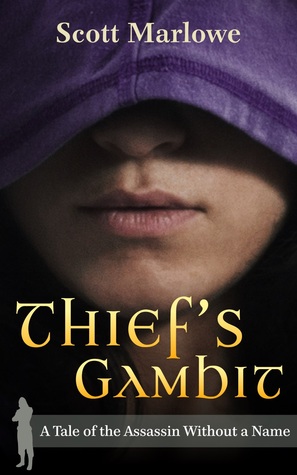 In this further adventure of the Assassin Without A Name, our hero is recruited by his ex love, Liz, for a special mission.

As with the other novelette length books in this series, I felt that its charm lay not so much in the plot itself as in the writing of the incidental parts.  I am not particularly interested in reading long, blow by blow accounts of fights or daring escapes, but I love the bits about the Assassin’s life, his thoughts, etc.  I like to picture him in his ‘working gear’, climbing over his rooftop empire like a cat, unseen by the Black Guard who seek him below, and reading little snippets about his life, like his secret hideout in the deplorable Shambles area of town, where one takes one’s life in one’s hands simply by entering its streets…

Scott Marlowe has invented a marvellous character, and writes beautifully, with wit and a wonderful turn of phrase.  I’d like to see a novella telling about the Assassin’s early life, something that makes more use of the writer’s powers of observation, character portrayal and presentation of atmosphere.  Again, this reminded me very much of some of Roald Dahl’s stories; the style of writing is very similar. Good stuff!