Barb has been reading Unhinged by Shelley Pickens 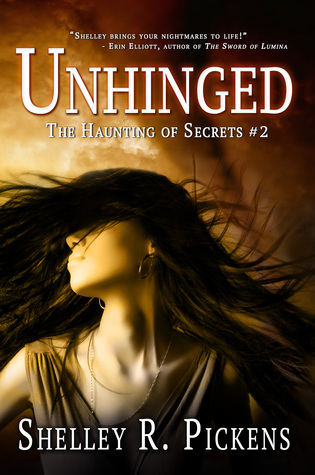 Is it clinical depression if you’re cursed? Aimee Richardson, a sixteen-year-old high school student, should know. After all, she’s been through hell. It killed her. But she emerged, still cursed but with a loving adoptive mother, best friend, and even a boyfriend. Life should be good, right? Well, not if she’s still doomed to experience the memories of people she touches.

Careful to wear gloves and avoid skin-to-skin contact, she keeps even those she loves at a distance. But when people at her school begin to fall prey to a mysterious “illness” that drives them to homicidal madness, she has to question even the precarious life she’s carved out for herself. Sixteen years of experience taught her to be suspicious of others, but when those she loves become the next victims of the plague, she’s forced to turn to two strangers for help. Brett, another student at her high school calls her his “dark princess” and seems driven to provide assistance. And Dr. Evans, a forensic pathologist, seems strangely familiar with the specifics of Aimee’s curse.

I haven’t read the first volume in this series, so there are a few details I don’t know. But for the most part, author Shelley Pickens provides just enough backstory to make Unhinged work on its own. As dark fantasy, magic in Unhinged is a curse. The threat is that it will be used to mind rape the populace into submission. Apparently, it can only be defeated by the most powerful thing in the (YA) universe—love.

I ignore the gun and look David straight in the eyes. “You’re right. You’ll never be my equal. Because you have no idea how to love.”

David laughs. “Love? Who cares about love? I’m about to be the most powerful man in the world. You can take your love and shove it.”

Aimee is, for lack of a better term, the Eeyore—the teen version of the gloomy grey donkey of A.A. Milne’s Winnie the Pooh. She only wears black, reminds us with virtually every breath that she’s cursed (not to mention a social disaster), and has unrelievedly pessimistic trust and self-esteem issues. “But cursed people don’t get happy endings. Sadly, the cursed never live long enough to see them.” However, we also see a different Aimee through the eyes of the people who value her. And over the course of Unhinged, the Aimee we initially meet has to change and grow into the person everyone else sees, and who is willing to save everyone because she’s the only one who can. “Well, screw that. If I have to die to save the ones I love, than that is what I choose–no one else.”

The pace stutters a bit in places, with the story setup—numerous examples of fellow students and others succumbing to the “sickness”—being great for shock content but a bit repetitive. Although there are a surprising number of references to faces covered with various emotions and voices that drip things, the writing is for the most part clear, competent, and often lovely. Take, for example, Aimee’s reliving of her boyfriend’s memories from the first time he sets eyes on her:

“What I thought was the worst thing that could happen to him, he sees as the best. Perhaps we are all destined to fall for that one person that is able to see us as we wish we could see ourselves—perfectly imperfect.”

There are a few plot holes (nobody ever seems to just pull out their cellphone and summon emergency assistance), some gory scenes, and much foreshadowing for the next book in the series, but for the most part Unhinged is just what it sets out to be: a dark, occasionally gruesome, thrill ride and a great example of the genre. I would give it four stars and look forward to more from this talented author.