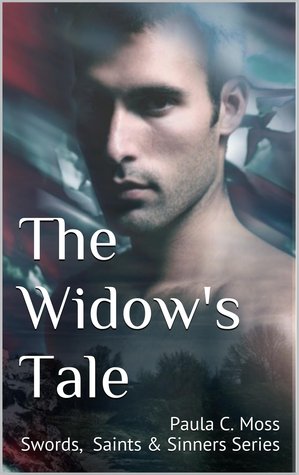 The Widow’s Tale is a genuine romance and a debut novel. Set in the era of the English Civil War (17th century) in the Yorkshire Dales (a favorite part of the world for me!), it recounts the life of 17 year old Charlotte Hart, married by arrangement to a local gentryman, Captain Oliver Grimwell. Even his last name made me hate him. Grimwell had the misfortune to die before he and Charlotte consummated their marriage and Charlotte wants her dower, a small farm, returned to her. Although this is her right under British law, Grimwell’s grasping family, including his nasty brother Phillip, refuse to let the land go. Charlotte is mighty headstrong, as they might say here in the South, and is determined to recover her farm, by hook or crook.

On one of her usual wild rides on the moor, she runs into some of Oliver Cromwell’s Army, the Roundheads, and meets the ruggedly handsome Nate Weatherall, a Cavalry officer. She gets away from him, but he later leads a group of Roundheads who garrison her family’s homestead. This creates problems for the family because her brother, a Loyalist, is hidden in a cave beneath the house.

Charlotte and Nate could not be more different. Charlotte is an impetuous, emotional, and stubborn young woman who continually makes bad choices, so many that I wanted to shake her and yell “Stop it!” Nate is a Puritan who believes women should be subservient to men. Despite their differences, they are attracted to each other and begin a relationship that will never run smooth but definitely runs hot, with some sex scenes that will satisfy most romance aficionados. There is a mild element of SM running through their relationship, since Nate takes pleasure in smacking her bottom when displeased with her behavior. She smarts from the beating but doesn’t turn away.

Charlotte’s schemes create tensions with her family, particularly with her outspoken older sister Cat, start a battle with the Grimwells, and lead to constant bickering with Nate. When her brother-in-law tries to rape her, Charlotte clocks him and leaves him for dead, necessitating a trip through the landscape of war-torn England, in and out of enemy lines, to find Nate.

I did have a few problems with the story. The language and banter between Charlotte and Nate is very modern and the author uses words inappropriate for the time, like snarky. I also found Charlotte a little over the top, not entirely believable for a woman of that time in history. Perhaps if she had been older? Finally, there is way too much eye-rolling and blushing – enough that I was acutely aware of it.

That being said, first novels are always hard. The author clearly knows and loves this period, as evidenced the details and the way they are woven into the story. The landscape and scenes are descriptive, but not overly so, and the secondary characters are clearly limned and very enjoyable. The fact some speak in a Yorkshire accent adds to the authenticity.

I think romance readers who try this book will not be disappointed, and I suspect the next volume in this series will be even better.