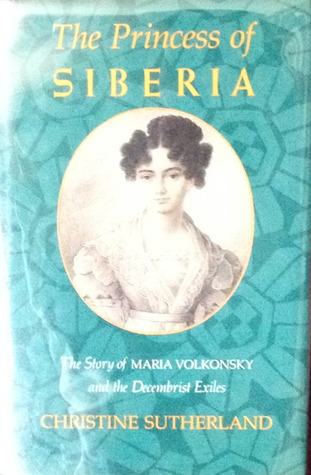 Everyone has heard of the 1917 Revolution in Russian but not a lot is known about an earlier one in December 1825
The “Decembrists” as they were called, were from the higher echelon of society and were dissatisfied with the way in which Tsar Nicholas 1 governed.
Their rebellion was discovered and  punishment was banishment to Siberia.
The Princess of Siberia is the story of Maria Volkonsky, after the initial chapters on what led to their dissatisfaction with the Tsar, the story tells of how one of the wives, and subsequently other wives followed their husbands to the town of their prison in Chita, near the border of China.
Their journey is described, the conditions, weather, methods of travel encountered and the courage displayed by those women.
Once there, they made a life for themselves, which also made life easier for their husbands and helped the local populous.

Beautiful, cultivated, the daughter of a hero of the Napoleonic wars, Maria Volkonsky had been married only one year when in 1825 the tsar sentenced her husband to life imprisonment in Siberia. Despite her family’s and the tsar’s opposition, Maria was determined to join her husband in exile. She was more than halfway there when the tsar decreed that she could never return from Siberia.