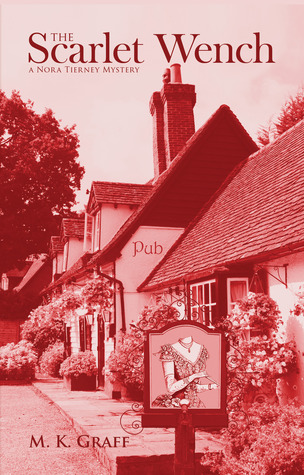 I was intrigued by the title of this book and discovered I had selected a true British cozy, a murder mystery with an alluring setting: an old inn on the west coast of England’s largest lake, Lake Windermere, in Cumbria, England. Cumbria is the Lake District National Park, and the author describes its beauty well in the pages of this book.

Nora Tierney, an American writer, has agreed to help Simon Ramsey, co-owner of Ramsey Lodge (the inn), run the inn while his sister, the other owner, is away in France on her honeymoon. Simon is the illustrator of Nora’s children’s books and was once in love with Nora. When Nora did not reciprocate, his affection found a new object: Maeve Adams, who is the manager of Ramsey Lodge. On this weekend a troupe of actors will encamp in the Lodge to stage Noel Coward’s play “Blithe Spirit,” and Simon needs help managing his peripatetic guests and all their needs. Nora’s love is Detective Inspector Declan Barnes, who works for the Oxford police. He is taking a much needed vacation at Ramsey Lodge, ostensibly to hike but really to spend time with Nora. Complicating their relationship is the fact that Nora has a six month old son, Sean, whose father is dead; his parents, whom Nora met at his funeral and dislikes, don’t know they have a grandson.

The actors recruited for the play are wonderful characters in themselves: Grayson Lange, the head of the troup and an aging, narcissistic playboy, accompanied by Fiona Church, whom he recently broke off with and the voluptuous blonde Gemma Harwell, the new object of his attentions. Poppy Braeburn doubles and the troupe’s costume designer and has designs on Grayson. Rupert Denton and Lydia Brown are aging actors with a grudge against Grayson: their daughter committed suicide shortly after Grayson ended their relationship. The most amusing troupe member is Helen Mochrie. She plays Madame Arcati in the play and is in character practically the whole time. Spoiler alert: she is also Grayson’s mother. The reader is drawn into the difficult, interwoven relationships of the troupe from the moment they arrive at the Lodge, and I found myself wondering why they were there and what were they up to?

A series of pranks sets the action in motion – a dead rabbit on a pillow, a trip wire on the stair – nasty deeds which escalate to a murder. A massive storm traps the troupe and the staff at the Lodge, and Nora who has become increasingly worried for the safety of her child, is determined to stick her nose into the mystery and help Declan unmask the killer. She agrees to take on the role of the person murdered in the play to get closer to the principle actors, but is under more pressure because a lawyer representing Sean’s grandparents is scheduled to meet her after the weekend.

In true British mystery form, there are a number of ancillary characters, any one of which could be the killer: the cook, the part-time staff person, and the Lodge’s handy man, who lost his wife some months before in a hit and run and who was hired as the stage manager. Who might have done the crime?

To augment the format of a British mystery, there is a cast of characters and a map of the Lodge at the beginning, along with chapter epigrams which are all lines from the play and which give the hint that the play’s plot is subtly influencing the action.

If I had any criticism of the book, it would be its rather slow start – but isn’t that typical of a British mystery? – and the fact that the baby Sean is practically perfect in every way. Would that my son had been that good at six months!

This is the third in the Nora Tierney mysteries, and I recommend it to anyone who loves this type of mystery – and many who might like to try one. I think a read of the previous two is definitely in order, but this one can be read as a stand alone.

The Scarlett Wench can be found on Amazon.co.uk or Amazon.com: