Today’s team review comes from Alison, she blogs at alisonwilliamswriting.wordpress.com 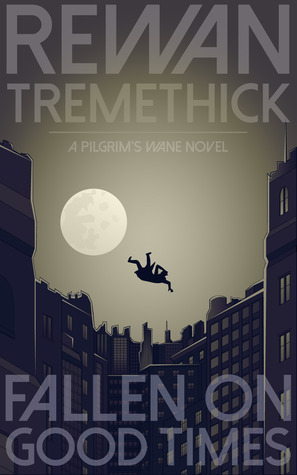 Fallen on Good Times successfully melds two worlds – the world of 1920s Noir with its hardboiled, smart-talking PI Laslo Kane and the urban fantasy world of ghosts, werewolves and vampires. It’s a clever idea and a clever book, full of humour, action, mystery and witty one-liners from the hero Laslo, a man whose ineptitude as a ‘normal’ PI has brought him into a world where the rules don’t necessarily apply. Add to this a case that sets him against the Mob and an ex-girlfriend he’s still in love with and Tremethick has gathered together all the elements of a fast-paced, exciting and unusual read.

The settings work really well and are as authentic as a twenties city under prohibition and awash with ghosts, trolls and vampires can be. It works because the author uses great subtlety with these supernatural elements. They are referred to and written about almost as though they are run-of-the-mill, and this makes it easier to suspend reality.

The writing is smooth, clear and sharp, perfect for the genre. Dialogue is natural and believable and the main character is well-developed and likeable. However, some of the action scenes were a little too drawn out – I lost what was happening at times. I also felt that some aspects were a little skimmed over – there were characters I wanted to know more about and I felt that the case was solved a little too quickly and too easily.

That said, this is an extremely well-written, enjoyable book and I’ll definitely be looking out for more from this author.