Judith chose to read and review Childhunt by Faith Mortimer 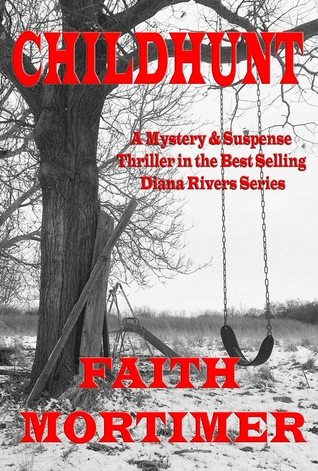 The plot of CHILDHUNT is an excellent one. I admire Faith Mortimer’s writing. I didn’t realise this was a follow on of the Diana Rivers, Psychological Thriller Series and that some of the characters had a past life in earlier books. This coloured my first reaction when reading of this novel and I needed to give it a second go.

I know how difficult it is to avoid information dumps in sequels. This is one reason, I think, that the story is slow in starting. The early chapters mainly consist of setting the characters and their back-story within the scene. We are first introduced to Adam (a detective), Roger (a retired barrister’s clerk). Diana, the obvious protagonist of the book, and ex-fiancée to Adam is only mentioned in a conversation between the two men about a past crime; the killing of two children. She is brought into the story shortly afterwards as a writer, now married to Steve. And it is through her we meet two of the important characters, Debbie and William; parents of Charlie and Hannah.

There are some thrilling action scenes but these are often slowed right down by long pieces of internal dialogue of the characters, especially the character of Debbie (ostensibly the person thought to be involved in the crime discussed earlier) And there are various times when the point of view changes within the narrative without warning, mid-scene, which slows the story yet again.

I don’t give spoilers in reviews so that’s as far as I’ll go.

The dialogue is good and differentiates the characters but the dialogue of the children didn’t ring true for me. Even being willing to believe they are exceedingly well behaved, Charlie’s voice sounded stilted and that of the little girl, Hannah, irritated, purely because it was written exactly as anyone with a lisp would speak. The odd syllable to show that she stutters is all that is required – you need to trust that the reader understands.

Paedophilia is obviously a difficult subject to write about and Faith Mortimer’s description of the physical appearance of Philip Bolton, the paedophile, is good (although palpably, and quite rightly) written to repulse) and, straight-away, the reader is made aware that there is a sordid mystery to his past. But I found the internal dialogue of the paedophile particularly uncomfortable; not only because of his thoughts but because of the way it was written. For example, “he grinned, lasciviously, thinking how pleasant and delightful touching them would be…”, when he realises his plan is working he felt a “…tingle with excitement in his groin and he let out a cackle of laughter…” and, when he touched the little girl, “The feeling made him groan with desire.” Ms Mortimer makes a good job of making the man repugnant but there was something about the delineation of the scenes that Bolton is in that feels melodramatic and wrong. But, as always, this is only my subjective view.

This is a well-plotted psychological thriller, written from a third person omniscient narrator’s point of view. There are enough clues drip-fed into the story to keep the reader interested (I guessed the real identity of Philip Bolton about halfway through the book – which was quite satisfying). And as I said at the beginning of this review there is much I admire about Faith Mortimer’s writing.

But I probably would have preferred an earlier book about amateur sleuth, Diana Rivers – if only to get to know the background of the characters (but probably because the subject matter of the crime was totally abhorrent.) I know these crimes are a fact of life; I was a child, living at the time of the Moors murders, in a village near to where the children were buried, and remember it far too well.

However, disregarding that, and purely on the basis of reviewing the novel, I have thought carefully about CHILDHUNT and, after much consideration, have given the book three stars.