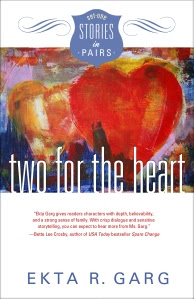 I didn’t understand why a book containing two short stories was called “Stories in Pairs” but I thought I’d give it a try.

I read the first one.  It didn’t seem to have extraordinary depth, but neither was it so shallow as to be trite – it was solid. A very sweet, solid little tale.

I went on to read the second one and was startled as my heart was rear-ended by a bus. A bus loaded with anger, grief and love, a deep well of emotion the first tale had not prepared me for.

When I finished, I finally understood the connection and the concept of stories in pairs and spent some time paging back through both of them, re-reading, and thinking. Days later I am still thinking.

I designed my series “Stories in Pairs” keeping today’s reader in mind. Each year you’ll get six pairs of stories to enjoy on your digital device of choice. The stories will come out every two months, starting with the major stories.

The major stories will release every February, June, and October, and the stories will share two things: a theme and a link. The theme will appear in the title of each book. The link? You’ll have to read the stories to find it. But I promise I’ll always include one.

That brings us to the other three pairs of stories in the year. Two months after the release of the major stories I’ll give you the More… stories. In these books you’ll find out more about the characters in the previous pair of stories. You’ll get a peek at the characters’ lives outside of the parameters of the original stories: deleted scenes, backstory, and possibly even alternate beginnings or endings to the stories. The pairs of the More… stories will release in April, August, and December.

I will admit, I was skeptical about this “Stories in Pairs” buisness at first. I get stories about people, but then I have to wait two months to find out more? Why aren’t they all in the same book? What kind of scam is this? Why is this so different? I think I should probably hate it on principle!

“Stories in Pairs” is about much more than a couple married for convenience and family wrapped in tragedy. It’s about the connections we make, with the people we see, those that we don’t know, those that we think we know and those that we know as well as ourselves. Solid little stories set up to make you look up at those around you and think.

Would I recommend it? These aren’t for everyone but if they sound even a bit interesting to you, I urge you to give them a try. Despite my original skeptical reaction it’s a good kind of something different going on here.