Noelle chose to read and review Concealment by Rose Edmunds 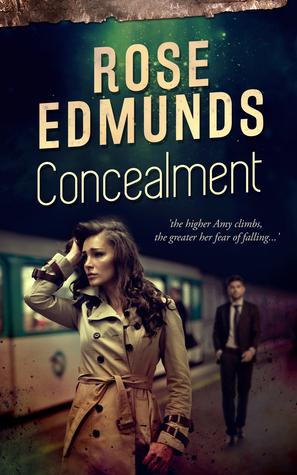 Concealment is quite a twisted mystery and unique in that it takes place in the arena of big business and finance. Amy, an executive in the company overseeing the financial aspects of a merger of a construction company with another, larger company, has risen through the ranks by dint of ambition and hard work. Another less determined person might not have achieved her position, given the fact she is the daughter of a pathological hoarder who made Amy’s childhood miserable and who is currently bringing misery to her life again. She survives by keeping her past a secret, a delicate balancing act.

The story begins with the discovery by the tax division of Amy’s company of some irregularities in the financials of the smaller of the two companies, irregularities which are later found not to be the problem initially thought. The one problem I had with this book is that the financial and business information was over my head, and I did not understand exactly what was going on; nevertheless, I managed to get a general idea.

Then Amy’s young colleague, a thorough investigator of the tax conundrum, is murdered, and Amy’s new boss Ed displays obnoxious behavior that she interprets as a desire to trash her career and boot her from the company.

As the mystery of her colleague’s death unwinds under Amy’s reluctant but intelligent investigation, the pressure on her by the smarmy Ed increases inexorably. He undermines her authority, gets friends to spy on her, and discredits her at every turn. Amy becomes convinced he is the killer and increasingly uses alcohol to calm her distress. Her tight control of herself and her life starts to crack, and as her paranoia increases, even the reader becomes worried that Amy is mentally unbalanced. Is there no one she can trust?

Amy gradually discovers that various parties to the merger are pursuing illegal agendas, which leads to a suicide and attempts on her life. To top it off, a nosy and imperious neighbor manipulates her mother to apply even further pressure on Amy’s already precarious mental balance. The reader is kept guessing to the very end and I found myself reading as quickly as possible to discover who was at the bottom of everything. Most satisfying is how Amy exacts her revenge.