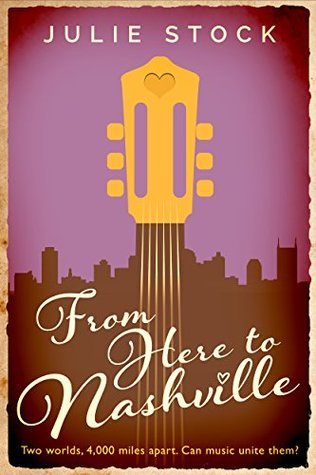 In her debut novel, From Here To Nashville, Julie Stock checks off all the romance novel tropes. Her heroine, Rachel Hardy, dreams of success in Nashville as a country music star. She just has a couple of little problems. First of all, there’s the accent. For some reason, the country music world just hasn’t attracted that many stars from coastal cities in England. Then there are her abandonment issues. But, with backup from her childhood friends, Rachel writes and performs her own songs at neighborhood pubs and gigs. As we meet her, she is singing and looks up to meet the eyes of hot American, Jackson Phillips. When he tells her he’s from Nashville, Rachel takes it as a good sign that her dreams will come true. But Rachel is still reeling from the loss of her parents and disappearing fiancé, while Jackson is hiding secrets of his own. There are more half-steps forward and back than a Texas two-step as the couple try to advance her career and their relationship.Reading From Here to Nashville was like eating comfort food—it’s easy to digest, feels familiar, and fills you up. You know going into it what you’re looking for, and Julie Stock competently delivers just that. The steady pace and predictable plot didn’t get in the way of the resolution. Rachel and Jackson’s alternating points of view were telegraphed in bold font, which was helpful, especially because I thought both could have used a more individual voice, not to mention richer use of colloquial expressions and speech patterns. Jackson, especially, would have benefited from an edit with a more authentic drawl and fewer Brit-speak slips (his living room is a “lounge”, he cleans by “having a tidy up”, sleeps late with a “lie in”, refers to a degree program as “on my course”, late night partying leaves him “shattered”, etc.). But overall, the writing was well-edited and clear.The settings in the beginning of the novel were lovely and believable. I could picture the small British seaside town, Rachel’s cottage, and her life there. But when the action moved to Nashville, it lost me. I haven’t spent much time there, but I didn’t recognize the almost sterile portrait of a place I found full of eccentric characters and colorful locations.I do have some small complaints that didn’t really get in the way of enjoying the story. For example, I wish there had been more explanation of how a Dorset girl came to be a country singer, even if it’s only the Taylor Swift/country princess variety and not LeAnn Rimes/Coyote Ugly. We never got a convincing picture of the Nashville music scene, which would have been fun.My biggest complaint, though, is that I found myself wanting to tell both Rachel and Jackson get over yourself. He’s apparently the insanely wealthy young head of his own music label, but he takes almost no CEO-type actions, and defers to his secretary as his “office mom”. She’s supposed to be incredibly talented, but we have no idea where her training and background comes from. He’s rich and handsome, she’s beautiful and gifted. I know those people have problems too, but it’s hard to make myself care deeply when each one is just keeping secrets and expecting the other to hurt their feelings.Overall, I’d call From Here to Nashville a solid three-star debut effort. Julie Stock has a firm hand on her characters and plot arc, and a nice way of turning a phrase. I think if she takes a few chances, stretches some of those tropes to their limits, and pushes her characters harder, her next book will be irresistible. I, for one, would like to find out.*I received this book for free from the publisher or author in exchange for an honest review. This does not affect my opinion of the book or the content of my review.