Today we have a review from Liz, she blogs at https://lizannelloyd.wordpress.com/ 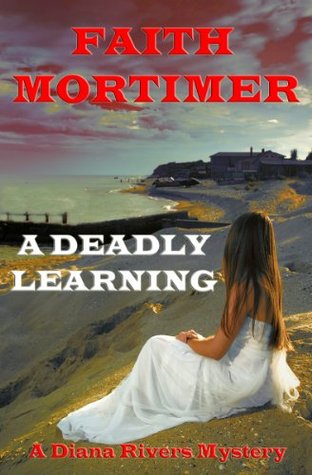 A Deadly Learning by Faith Mortimer

This is the sixth book in the series of mysteries solved by “author” Diana Rivers, but as the real author, Faith Mortimer, says each one can be read in isolation.

Diana Rivers and her husband Steve have decided to take a break from their home in Cyprus by going to stay with their old friend, Wendy, who is assistant head at Lagos International School and College in Portugal. She has asked them to come to help celebrate the twenty first birthday of her god-daughter, Louise.

But their relaxing holiday is soon interrupted by a gruesome discovery, buried behind a wall in the cellar of the science block which is being renovated. The remains of the body have been there for three years and while Steve has to travel to Lisbon and London, Diana applies her detecting abilities to solving this murder. She questions students and staff, putting herself in severe danger. Many of them are involved in illegal and unpleasant activities which they wish to remain secret, whether or not there is a connection to the body.

Louise is a worry to both Diana and Wendy, as she has become involved with a fellow student who is a particularly unpleasant young man, affecting both her studies and her behaviour. The staff are a disparate group of men and women, young and mature, who also have their own problems and no-one can be excluded from the investigation, especially after another death occurs.

There are a large cast of characters in this story but they are clearly described with well-defined characteristics and the reader feels that Diana is a safe pair of hands, even if she is rather fool-hardy. The mystery is maintained almost to the last page, in a very complex plot.

I read this while staying in the Algarve, which I know well, and although I could imagine the rather different environment of a college I didn’t feel a strong sense of place beyond the scenes on the beach.

I will certainly read another “Diana Rivers” mystery even though she is so annoyingly perfect, as Faith Mortimer writes fluent enjoyable prose keeping me guessing up to the last minute.