Today we have a review from Terry, she blogs at http://terrytylerbookreviews.blogspot.co.uk/ 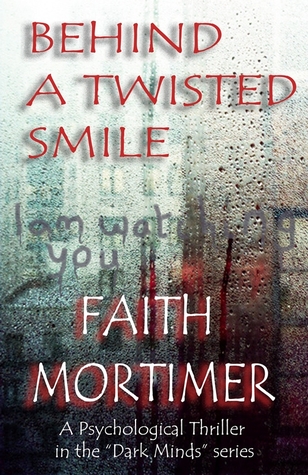 Behind a Twisted Smile by Faith Mortimer

A psychological thriller. Keen marathon runner Moya Waterford has had a brief relationship with Martyn Cousins, and thinks she will hear no more from him when she calls it a day. This, however, is when the trouble starts, as he insinuates himself into the life of her family and manages to convince everyone that he is a really nice guy. Moya suspects differently, especially when she finds out details about his past. Alas, no-one believes her….

This is a fairly standard plot, but it’s in the telling, right? I sped through the first fifty per cent of the book on a long train journey without even noticing I had read so much of it; I found the writing style very readable, and there were no long boring bits or diversions that might have tempted me to skip read. Martyn was delightfully slimy, sister Evie and mother Belinda irritating in their naiveté; the dialogue is mostly smooth and the book starts with a good punch.

I’m in two minds about this one; one the one hand I did enjoy it, but on the other hand I felt frustrated by it because the whole premise by which the plot hangs is, I think, unfeasible. Very slight spoiler alert here; skip to the next paragraph if you don’t want to know anything at all about the plot. Right from the beginning Martyn gives Moya’s friends and family the impression that he dumped her and she is upset and jealous because he is now with her sister, Evie. So why doesn’t Moya make clear that it is she who finished it and she doesn’t even like him much? She’s supposed to be a strong, outspoken sort of woman but for some reason is struck dumb about this detail until much later. Next, someone from Martyn’s past travels hundreds of miles to reveal shocking details about her own experience with him, and to warn Moya that he is dangerous, but for some reason Moya does little about it, and doesn’t even seem to give it more than a cursory consideration although the pattern is clearly repeating itself. When she does finally start to reveal details, her lifelong best friend chooses to believe Martyn over her, despite all the evidence.

I liked Faith Mortimer’s writing style and would read another book by her; if you are good at suspending disbelief this might work for you (as I can see by the reviews it has for many), but for me it needed more thinking out, perhaps another draft or two to tighten up the prose, and less inclusion of unlikely occurrences in order to push the plot forward. I was expecting much more of a twist in the tale all the way through, and suspected another character’s involvement in the evil-doing; I thought I’d been really clever and guessed it at 57% but I was wrong; a really great twist at the end would have made the book so much stronger.