Today we have a review from Terry she blogs at http://terrytylerbookreviews.blogspot.co.uk/

Terry has been reading From Here To Nashville by Julie Stock 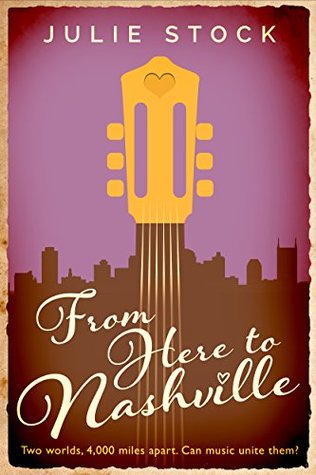 From here to Nashville

The debut novel by Julie Stock is a sweetly old-fashioned romance, in which English country singer Rachel meets her handsome prince, Jackson Phillips – who just happens to be a rich and successful independent record mogul from Nashville.  It’s strong attraction at first sight, but the path of true love is not a straightforward one.

I think this novel will appeal very much to readers who love traditional romance stories; I describe it as ‘old-fashioned’ in a good way; there’s little reference to popular culture or general 21st century attitudes and it’s very much of its genre.  It’s not what I gather is called a ‘sweet romance’ as there is a bit of earthy passion there too, but of the ‘mounting desire’ type, nothing at all graphic, and there’s no bad language in it, a factor that will appeal to many.  Obviously it will have an added attraction to country music fans, too!

This is a difficult book for me to review as Julie Stock has written a weekly blog about her path to publication, many episodes of which I have read, so I know a little about the quandaries that presented themselves during the process.  As far as the continuity, structure and pace go I think she has made an excellent job of it, and she made a good decision to tell the story in two alternating first person points of view, which always adds interest.  The book is well presented with minimal errors.  I read that she was worried about lack of description of her settings, but I thought that the beginning, in particular, was illustrated very nicely.  The sense of an idyllic British seaside town in August is all there; there’s a slightly dreamy quality about it which really worked.

The majority of debut novels have room for improvement and, for me, the weak points in this book were the dialogue and the feasibility of some of the characters and their reactions.  I thought Rachel’s co-musician Sam was very realistic and by far the most well written character; his reluctant sulkiness about Rachel and Jackson’s attraction was spot on.   However, sadly, though I found Jackson delightful he didn’t come over to me as a successful, multi-millionaire record producer.  Why not?  It’s a hard one.  This is what I think: to have achieved all he had at such a young age would probably mean his being confident, very worldly-wise, street sharp, artful in dealing with people and no doubt experienced in romantic matters too, especially as he’s a handsome chap, whereas Jackson comes across as just your average nice guy-next-door with insecurity issues.  The ‘big row’ that explodes in the middle of the book didn’t quite work for me; I couldn’t see a man of Jackson’s age/standing/charisma/experience reacting in as extreme a fashion as he did to a few bitchy remarks (I won’t say any more: spoilers), especially when he was so happy, and Rachel didn’t behave like someone who loved him, either.  I do get that the story about their relationship is much to do with overcoming their own misgivings and hang-ups due to past events, though.

The problem I had with the dialogue in the first half of the book is that it’s a tad stilted; characters talk to each other in perfectly structured sentences, giving just the right amount of information required to take the plot forward, whereas in real life people use colloquialisms, half sentences, private jokes, make grammatical errors, go ‘um’ and ‘er’ and ‘y’know’, have personal conversational quirks, etc (admittedly, Jackson says ‘sweetheart’ a lot, an endearing trait of his!).  I’d have liked to see a better understanding of how young single women talk to each other, how men discuss women between themselves, dialogue that illustrates character rather than merely supplying info.  I’m happy to report, however, that it does loosen up about halfway through; the lovely happy bit when Rachel and Jackson are first in Nashville together, and meeting his family, is very sweet and should put a smile on the faces of all romance lovers, as will further sections later in the book.

To sum up – the research of practical details throughout the book cannot be faulted but the lack of insight into the music industry and character realism weakened it. However, there are plenty of positives, lots of happy gooey bits for romance addicts, and I’ll give this suggestion to Julie: try writing a big emotional scene over a couple of glasses of wine, it helps you to let go and feel what people really would say under certain circumstances.  I wrote a difficult chapter of one of my earlier books via Blossom Hill red, and it’s one that people say actually makes them cry.  It works!