Today we have a review from Noelle, she blogs at https://saylingaway.wordpress.com/

Noelle chose to read and review Stranded In The Seychelles by Bev Spicer. 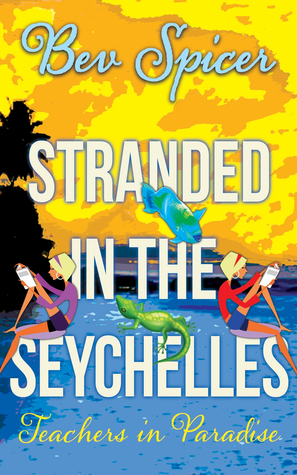 Stranded in the Seychelles is a fun, frothy memoir of two young women looking for adventure before they have to make a life decision about settling down. It is written by Bev Spicer, who has written several humorous memoirs of her life, including Bunny on a Bike, telling of the time she was a Playboy croupier in London.

Bev and Carol, her bosom buddy, have come to a fork in the road. Carol has just returned from teaching English to monks in Tibet, while Bev has held a series of uninspiring jobs, including typing out legal contracts and folding and labelling bin bags to send off with a quote to possible customers (that one really impressed me!). She finally gets a postgraduate teaching certificate from Cambridge and, at the time of this story, has been teaching English to uninterested secondary school students for a year. When Bev comes across an ad for qualified English teachers for the National Youth Service of the Seychelles, they both bite. I had to look up the Seychelles: the Seychelles Islands are an archipelago in the Indian Ocean off the eat coast of Africa, in the same general region as Zanzibar, Madagascar and Mauritius. The two friends fly out to their new island home, picturing a luxury villa on a beach, tropical fruit and air-conditioned class rooms. They should have been alarmed by the lack of information or even a syllabus for the classes they were to teach. By this time the reader is thinking too good to be true, don’t do it!

They step off their plane into the climate of a convection oven, peopled by native and mixed raced individuals who speak mainly Creole, with strange customs and even stranger food. Eventually they are given their own house, with a steady breeze from the ocean and electricity. Also lizards and a wondrous variety of spiders, which spin webs like nets overnight.

Their school is on another island, which they reach by landing craft each morning, together with other recruited teachers. The voyage is spent gagging on the acrid black smoke from the engine. Their classrooms are outside under tin roofs, which heat the air beneath to baking levels by the end of each day, and have poisonous centipedes dropping in from time to time. Teachers at the school come from various European countries as well as Sri Lanka and Mauritius, making a colourful, multilingual lot. The students, by contrast, are perpetually sleepy and unengaged in learning, despite Bev and Carol’s best efforts.

This memoir is filled with eclectic characters, surprising and humorous adventures, lots of local beer, and experiences on and with an ancient Kawasaki 250 cc motorbike they purchase for getting around. Along the way, the reader is nicely schooled in the sometimes harsh realities of life in a poor, politically unstable country. A concatenation of events lead to Sue and Carol’s long and eventually successful attempt to terminate their contract after the first school term: most significantly to them was the ban on traveling anywhere during their breaks except within the Seychelles and Mauritius. Not to mention the lack of eligible men.

This was a fun read, written with a sharp wit and keen sense of humour, with an eye to the ridiculous and candour with the politics. It’s a great memoir. It made me want to be young again, carefree and open to any adventure.

Bev Spicer was born in a small market town in the Midlands of England and educated at Queens’ College, Cambridge. She was a lecturer at Anglia Ruskin University before moving to live in France with her husband and two of her children; there she writes full-time. Along the way, she has been a teacher, blackjack dealer for Playboy, examiner, secretary (various sorts – most boringly ‘legal’) and Sunday checkout girl at Tescos. As well as France, she has lived in Bridgnoth, Cambridge, Rethymnon (Crete), and Mahe (Seychelles). The next place she has said she wants to explore is probably Spain. She reports that her husband is very tolerant.

Buff-Tailed Bumblebee Enjoys The Mahonia #SixOnSaturday
Cheese scones fresh out of the oven. Tasty in a chilly day.
Lynne (@lsfwrites) reviews boxset No Woman Is A Island: Pandora's Box Set #1, for Rosie's #Bookreview Team #RBRT
Frost coated leaf this morning. So pretty!
'Hallman makes 1897 Tokyo glitter with diamonds, cut glass, and broken tinsel'
Some photos from yesterday's woodland ramble to Caesar's Camp.
'A story about isolation, paranoia, and division'. Olga reviews #Horror Golem by @pdalleva_author, for Rosie's #Bookreview Team #RBRT
'A wonderful wildlife journey with British bees'. Rosie's 5* #Bookreview of #NaturalHistory Dancing With Bees by Brigit Strawbridge Howard
'There is just enough detail to bring a face, a room, or a street to life without over burdening the reader'. Frank reviews Talk Of Tokyo by @heatherhallman_author, for Rosie’s #Bookreview Team #RBRT