Death in the Family

Things are on the up for Sophie Morgan.

She fended off vampires on a holiday to Antwerp, escaped them on her return in Coventry, stabbed her neighbor and is slowly rebuilding her life in her hometown of Bethel. Running the family property business may not be lucrative but she’s happy. Since returning to Wales, she has only had to kill one vampire and thanks to the linoleum on her kitchen floor, even that was an easy clean up.

Then a mixed blessing arrives in the form of Mickey Kelly, the barman she had a brief flirtation with in Antwerp. After being missing for months, he arrives on her doorstep one rainy night. His brother has been murdered and vampires are coming for her. Little do the pair know that Sophie’s estranged father is among their numbers. He’s coming for his daughter… and he’s not the only one.

Death in the Family is the long awaited sequel to Relative Strangers, with some familiar faces as well as some new ones. Will Charles Ferrers, Sophie’s former adversary, pursue her to South Wales and if so, to what end? Who is the mysterious man following her? Will Sophie and Mickey finally consummate their relationship and where will it lead them? Or will there be more than one new man in her life?

Find out how our practical, resilient, if not slightly insecure, Sophie deals with a whole new range of challenges in the second in the ‘Sophie Morgan vampire series’. This time she has bigger problems than vampires to deal with. This time she has family visiting.

Death in the Family is the second Sophie Morgan vampire book and will be available from Amazon from 14th February – the perfect valentine gift for the vampire slayer in your life!

To celebrate the forthcoming release of the book, the author is making the first book in the series, Relative Strangers free on Amazon on the following dates: 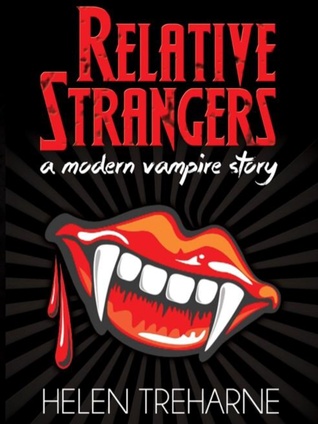 It is available for free NOW for Kindle Unlimited

Sophie Morgan is 23 and has always done the right thing. She’s caused no stress for her family, worked hard through university, has taken a successful leap onto the career ladder and nurtured a reasonably healthy bank balance. It’s no small surprise then when, on a post relationship break-up, mini-break to Antwerp, she pursues a pair of thieves who steal her friend’s handbag. But this is only the start of her world being turned upside down. Ripped from the streets into a dark alley she is violently attacked, barely alive when quirky Irish bar worker, Michael Kelly, stumbles across the scene.

The pair, shocked by their experience and uncertain whether they have killed her attacker in the brawl which follows, go into the night for answers.   They get more than they bargained for. Sophie quickly learns that vampires exist, her neighbours back home aren’t what they seem and new boyfriends can be found in the strangest of situations.

Relative Strangers is the first in a new vampire series with a distinctly British flavour, but which will appeal to everyone. Reviews call it “a vampire tale with bite”, with “brilliant characters that draw you in” and a very fresh take on the genre. Read it now to find out reviewers are raving about.

In addition to being the creator of the developing “Sophie Morgan” series, Helen is an urban poet and social commentator who can frequently be found ranting in the Twitterverse. She knew the degree in Sociology would come in handy some day!

Helen lives with her husband, three cats, an entrenched tea addiction and an increasing collection of stringed instruments. When she’s not writing she spends her time daytime hours working in communications and volunteers for a feline welfare charity. She also spends too much time watching Supernatural and Buffy the Vampire Slayer.

She also can’t be trusted near stationery and has probably had more come backs than Cher.