Today we have a book review from Cathy, she blogs at http://betweenthelinesbookblog.wordpress.com/ 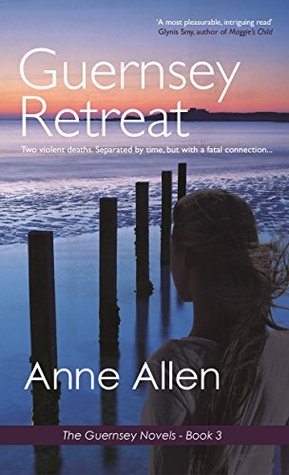 Malcolm Roget was born in Canada to where his mother fled after her fiancé, Malcolm’s father, was murdered just before the start of WW2. He has been a successful hotelier and now wants a change of direction. Having spent a considerable time in India exploring the concept of making life style changes though meditation and relaxation, he travels to Guernsey, his mother’s birthplace, to open a spa hotel and sanctuary at what was his father’s beautiful island home. While renovation works are in progress, human bones are discovered buried in the grounds. The remains prove to be those of Roland Blake, Malcolm’s father, and Malcolm’s search begins to see if his father’s killer is still alive and so bring him to justice.

Louisa Canning, recovering after a botched, attempted burglary caused her mother’s untimely death, decides she must honour her mother’s dying wish and try to find the father she has never known. Her search takes her to La Folie, a health spa in Guernsey and brings her much more than she would ever have imagined. She and Malcolm both learn valuable lessons about life, love and family.

Louisa and Malcolm are both troubled by buried secrets and past events and, as their relationship grows, they begin to discover, not only their warmth and affection for each other but also the threads of the mystery and intrigue that binds their pasts together

The blossoming relationship between Malcolm and Louisa is realistically drawn and, although I did find some of the dialogue a little unconvincing at times, the hopes and fears expressed are just as I would imagine. The vividly scenic descriptions of Guernsey paint a beautiful picture and bring the island to life, the beaches, the countryside and the fabulous sounding restaurants, evoking fond memories from my visit to the island many years ago and making me long for a return visit.

Find a copy from Amazon.co.uk or Amazon.com