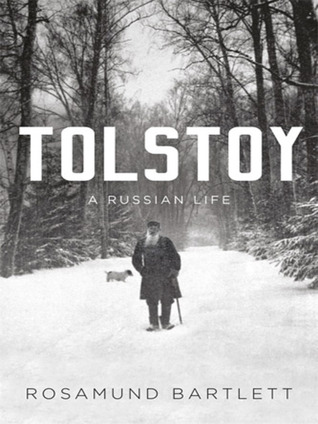 Avid Reader’s thoughts
Leo Tolstoy is renowned for his writing ‘War and Peace’ and ‘Anna Karenina’ both world classics. The book ‘Tolstoy’ by Rosamund Bartlett tells the story of his life and background in Russia  between 1828 – 1910. He travelled extensively in Russia and Western Europe. He became a teacher, a soldier fighting in the Crimea War, a critic of conventual ways of life and government and friend of the peasantry. A hugh tome packed with information and interest.
Book Description
In November 1910, Count Lev Tolstoy died at a remote Russian railway station. At the time of his death, he was the most famous man in Russia, with a growing international following, and more revered than the tsar. Born into an aristocratic family, Tolstoy had spent his life rebelling not only against conventional ideas about literature and art but also against traditional education, family life, organized religion, and the state. In this exceptional biography, Rosamund Bartlett draws extensively on key Russian sources, including much fascinating new material made available since the collapse of the Soviet Union. She sheds light on Tolstoy’s remarkable journey from callow youth to writer to prophet; discusses his troubled relationship with his wife, Sonya, a subject long neglected; and vividly evokes the Russian landscapes Tolstoy so loved. Above all, she gives us an eloquent portrait of the brilliant, maddening, and contrary man who has, once again, been discovered by a new generation of readers.
Find a copy here from Amazon.co.uk or Amazon.com