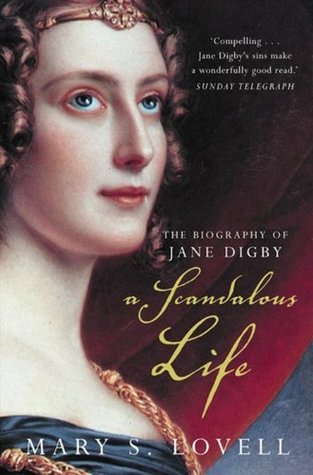 A celebrated aristocratic beauty, Jane Digby married Lord Ellenborough at seventeen. Their divorce a few years later was one of England’s most scandalous at that time. In her quest for passionate fulfilment she had lovers which included an Austrian prince, King Ludvig I of Bavaria, and a Greek count whose infidelities drove her to the Orient. In Syria, she found the love of her life, a Bedouin nobleman, Sheikh Medjuel el Mezrab who was twenty years her junior.
Bestselling biographer Mary Lovell has produced from Jane Digby’s diaries not only a sympathetic and dramatic portrait of a rare woman, but a fascinating glimpse into the centuries-old Bedouin tradition that is now almost lost.

A Scandalous Life. by Mary S. Lovell
Jane Digby born 1807 married Lord Ellenborogh when she was 17 and he was in his 30’s After leaving that marriage she had various affairs with men of different nationalities before finding happiness at almost fifty with a Bedouin nobleman, living in the desert and Damascus. She died in 1881. A real glimpse of the times in differing countries. I wonder now, if the house in Syria that Jane built still stands after the recent troubles.