Today our guest is Mark King, author of yesterday’s book Frenzy. Here is a link to the post if you missed it. http://wp.me/p2Eu3u-5HT

Let’s find out more about Mark and his book.

I live in the city of Norwich in the county of Norfolk in the U.K. It’s one of Britain’s most historic cities and the hub for present day literature. Norwich is the only English UNESCO City of Literature with a thousand year history of writing right up to the present day. A lot of major award winning English authors of both sexes over the last twenty years have some type of connection to Norwich or Norfolk. That’s only just a small piece of what makes Norwich a great place to live and somewhere I am extremely proud to be associated with.

3) What was the one idea behind Frenzy?

The idea first came for me one Monday morning during the recent financial crises that had engulfed the whole world while I was driving. I had a secure job with staff under me working for blue chip clients while handling a multi-million pound budget; and I was absolutely miserable traveling to my first working appointment of the day. Governments around the world had virtually bankrupted themselves for generations to come to save the banking system, or more specially the people at the very top of it, and now the rest of us are having to pay for it; either through higher taxes, or a reduced standard of living. The retirement age was increased to 68, and will probably increase to 70 if not more, and then I realised there may not be a golden age of retirement anymore. Most people can expect a life of toil before they die. In that moment the Bankers became the Overseers, the seven procedures became the lies we have all been told and the achievement centre is the promise of a golden old age that future generation may never see. By the time I arrived home that evening the story was set in my head. I knew I had to resign from my job to complete the book. That’s exactly what I did and Frenzy a Daniel Jones Story by Mark King is the finished product.

The Over-seers represent not just the bankers, but all the people at the top of the finance system who have had a feeding frenzy off humanities labour since the liberation of the finance system that started in the early 80’s. Taking grotesque risks with our future, and our children’s, while taking out monstrous payments in bonuses which has left behind a hideous mountain of debt for us to clear up.

5) Can you tell the readers briefly about Daniel’s village life?

Daniel’s life is like most people’s lives today. It has its ups and downs and can be hard trying to cope with life’s daily trials and tribulations, but he, and everyone else in his community, believes if he works hard, keeps to the rules (seven procedures) and believes in the new gods called the Over-seers it will all be worth it in the end; because he can retire to a life of relaxation and security. Just like until recently when we were all told that if you worked hard, paid your dues and believed in the consumerist society you could retire at 65 to a relaxing life of cruise ships and enjoying time with the grand-children. For a lot of people this isn’t going to come true.

6) What happens to villagers on their Achievement days?

Now that’s for the readers of Frenzy a Daniel Jones Story to find out! But all I can say other than this is that it always takes people by surprise when they find out the truth, just like Daniel.

7) Tell us about the Triclops.

The Triclops are terrifying walking machines that stand hundreds of feet tall on three legs thus you get the first part of the name Tri. They have a body that transports the Over-seers over the land with a centre viewer that looks like one eyed-monster, just like a Cyclops, so you get the second part of the name, clops. We in the U.K are under constant C.C.T.C surveillance that keeps us under control, and the Tri-clops is the Over-seers tool of fear that keeps humanity of the future under control.

8) How long has Mary been in the desolate Lands?

Mary is just a young girl when you first meet her in chapter one and then she’s in her mid-twenties when in the resistance she rescues the young Gwendolyn. When you see her again later in the book she is her mid-sixties so in one way or another she would have spent sixty years living in a land of destruction when the Overseers first appear and take control. The story is based in the near future and the warnings signs of the Over-seers arrival are mentioned in the book. Some would say those very same warning signs are present today! There have been unprecedented weather events throughout the world recently. Are these a sign of things to come?

9) This is a Daniel Jones Story, are there more adventures to come?

Yes. The sequel to Frenzy, which is initial titled Daniel Jones Doom, should be published near to the end of 2014. I have kept to the same fast pace, exciting and vivid story telling that is to be found in Frenzy. In fact I like to think that the sequel is as good or has even surpassed the original book in a thrilling and stimulating read that will keep everyone from young to old, of both sexes, glued to the pages as the story unfolds.

Readers can follow my weekly posting on my blog at always-hanging-around and through my Twitter page @author_king. I’m also on Goodreads and there is a Frenzy-a-Daniel-Jones- story Facebook page. I’m also on Google+ and for people in the media I’m on LinkedIn. Also I can be contacted via email at markkingtheauthor@gamil.com. My books are available through most outlets and also on Amazon U.K and Amazon U.S.A hard back or kindle, Nook and iTunes etc. 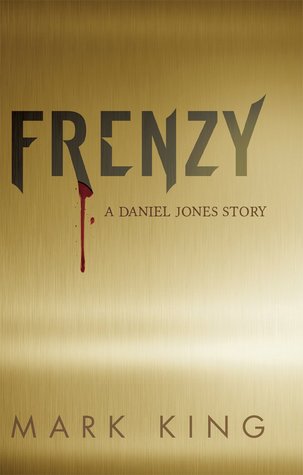 Thank you Mark and Good Luck with the launch of the next book.