Today we have a review from Book Review Team Member Cathy, she blogs at http://betweenthelinesbookblog.wordpress.com/

Cathy chose to read and review BioKill by Stuart Handley. 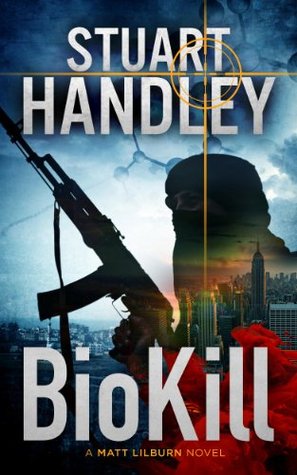 A chillingly realistic scenario involving a group of terrorists sending a contagious virus over to the United States. Matt Lilburn, a special agent with Homeland Security, along with Dr Evangeline Crawston, a British scientist with a doctorate in bio-pharmaceuticals, are both assigned to the case and in a desperate race to stay one step ahead of the terrorists.

The terrorist cell in the United States, run by the menacing Bomani, had just found two new recruits and they were committed to causing as much damage and disruption as possible.

The Director of Counter Terrorism, Allan Hall, and the Director of Emergency Management, Suzanna Lopez, together with Matt and Evangeline, are under pressure to stop the terrorists but all is not as it seems in Homeland Security.

The action and intrigue, with an unexpected twist, is intense and increases the level of suspense. The concept of the story is fascinating, gripping from the start, bringing home the terrible and conceivable possibility of bio terrorism.

A very well written and researched novel, which has it all…murders, high-speed car and helicopter chases, a rather gruesome mutilation and passionate encounters. The switches in location from the United States to England and the Gaza Strip and back again is accomplished with ease, creating a continuously flowing narrative which is a pleasure to read.

I’m enjoying Stuart Handley’s dramatic and visually descriptive writing style very much. The characters are well-defined and authentic, even down to one-off appearances, such as Bonny, the neighbour of the two young Syrians. I look forward to more adventures with Matt Lilburn.