Today we have a review from Book review Team Member Noelle, she blogs at http://saylingaway.wordpress.com

Noelle chose to read and review Britannia: The Wall by Richard Denham 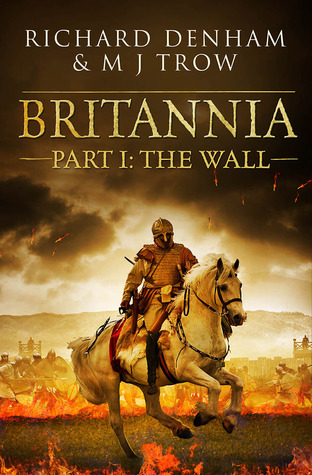 The year is AD 367 and four Roman soldiers of different age and rank return to their fort after hunting for deer to feed their garrison. They find everyone at the fort slaughtered, horses taken and food pillaged. Their fort is one of many along Hadrian’s Wall, a defensive fortification built by Romans in AD 122 and separating Britannia – the furthest extent of Roman rule – into a north and a south. North of the Wall are a dozen wild peoples, while south of the Wall there is Roman rule and an uneasy peace with other tribes living there. The four soldiers are 19 year old Leocadius, a foot soldier who is a womanizer and braggart; Vitalis, also a foot soldier, who is two years younger and still in reality a boy untried in battle; Semisallis Paternus, who has a wife and child living at another fort; and Justinus, a phlegmatic circitor or cavalry non-commissioned officer, who at 30 years old considered an old timer and is their leader by rank. Horrified by what they find, they decide not to bury the dead but are led by Justinus to the next nearest fort, in the hopes of finding reinforcements. There they find the same scene, but Paternus’ wife and son are not among the dead. The soldiers follow along the road between the forts, finding more slaughter and raiding, while heading south to a major town in the region. When they stop to rest by a cold stream, they are nearly discovered by the raiders, tall blond men riding Roman cavalry horses and speaking an unknown language. What were Saxons doing in Britannia?

Thus begins Britania -The Wall, an historical novel which has excitement, a good amount of brutality and gore, as befits the times, and wonderful historical detail and content. The authors have created an accurate world of Britannia at the times: the tribes and their characteristics, the organization and leadership both within the Roman army and the settlements, the gods and religious practices, as well as the living conditions. They are especially effective in the description of ancient Londinium, which would evolve through the centuries into the London we know.

The soldiers discover that the destruction of the raid was actually carried out by an army made up of many tribes, using Roman fighting techniques, and led by a giant of a man wearing a distinctive silver helmet, who is called Valentinus. There is a mystery running through the story of how these four soldiers became heroes of the Wall, how the Wall is rebuilt, how Londinium is fortified against attack: who is this elusive, charismatic leader? And when will Valentinus and his unholy alliance of Picts, Saxons, and Scots attack again?

This is a book for an audience of male readers of historical fiction; while I enjoyed it, it is not something a woman would pick up at first glance unless she was enamoured of that time and area, as I am. The major drawback to the novel is the Latin terms used are not defined. I took four years of Latin and even translated a portion of Caesar’s Gallic Wars, but I still had to look up a lot of terms along the way, which took me away from the story. I strongly suggest a glossary of terms, which will open the book to a larger readership.

The authors have created real and engaging characters in the four soldiers and provide us with lyrical and colourful descriptions of the times and society in which they live. I do recommend this book as an historical novel of substance, and I look forward to the next volume in the series.