Today we are joined by Dallas Sutherland author of yesterday’s book The Landland Chronicles: The Greying. Here is a link to the post if you missed it. http://wp.me/p2Eu3u-5FV

Let’s find out more about Dallas and his book.

I live in Eumundi which is a small hinterland town on the Sunshine Coast in Queensland, Australia. It’s just north of Brisbane. The weather is great all year round, not too hot, and not too cold in the winter. There is some talk of Eumundi becoming a Book Shop town. This will be amazing, especially for local authors. The town is also known for its thriving market which operates Wednesdays and Saturdays.

I always loved to write when I was a child. Then I had a break for many years while working in various jobs. It was not until I began to study Literature at university that I rekindled my love of writing. So, to answer your question, I’ve been writing seriously for about 18 years, but not putting out anything for publishing during much of that time. Most of my writing has been academic: essays, plays, poetry, that sort of thing.

3)What is the one idea which started this book?

A sense of loss and grief

There are many variations on the origin of Ogam Script, or Ogham (pronounced O em). From a mythological point of view, and one that I like, it was an alphabet thought to be used by the ancient Druidic Celts. There are about 25 letters in the alphabet and these were used to pass on ancient wisdom and knowledge. The letters was usually inscribed onto a wooden staff carried by Shaman/poets. A series of lines, or cuts, were made on the edges of stones and pieces of wood. There were several of these Ogam alphabets; the most widely known was one where each letter related to a sacred tree. Others related to people, places and objects. Ogam was also used to mark boundaries of property, whereby letters were carved into stones. Variations of Ogam Script can be found in Ireland, Wales, England, and Scotland.

Whatever the case might be, I like to think that it is a magical alphabet that might pop up again and again in fantasy stories. Hence, my inclusion of it in The Greying.

5)You have some great creatures in the book can you describe the Homunculi and the Firbog to readers?

I’ve named the Firbog after an Irish mythological race, the Fir Bholg, because I like all those tales about the earliest peoples who invaded and conquered Ireland, and who were in turn forced to flee by subsequent invaders. There is a great sense of mystery which surrounds their physical appearance and also their magical abilities. My Firbog, of course, are an entirely different kind of race. There is some magic that goes with them, but they resemble canines in their facial appearance, and the thick fur-like hair which covers their bodies and limbs reinforces the idea. The Firbog are warlike and tend to bark quite often.

An Homunculus is a little man, or manikin. He derives from the middle ages and the word has its roots in Latin. Alchemists first defined the idea that a human spermatozoa or egg-cell could contain a miniature preformed human being (preformation). In this sense, if that were possible to do, then the little man or homunculi could be made and enlarged to a certain degree, and would then be available to do the bidding of the creator. My Homunculi are puppets of the evil Queen Berilbog who has created them. Or has she? I guess you will have to read the book to find out. They are small, stealthy, and sinewy, and are commanded by the Firbog. In The Greying they are able to fly on the backs of the many-headed-winged-things. They know how to fight, too. I had a lot of fun bringing them into being.

These creatures are gatherers of people’s souls. They do the bidding of their masters, the Fair Folk. Pitterpatterdell also tend the gardens inside the City of the Fair Folk and look after the sacred stream. Soul gathering is carried out in Dead Wood, although not many people travel to Dead Wood these days, so there is not a lot of soul gathering to be done.

7)What has happened to the Senescent tree?

The ancient Senescent tree is near the end of its life, which is what the word ‘senescent’ actually means. It is no longer capable of reproducing. The trunk and branches of the tree hold the wisdom of the Pictish people. There is much magic to be learned from the tree if only Josh O’Tosh, the last of the warrior Pictish priests, is able to receive more instruction. Josh’s role is to guard both the tree and Dead Wood. He doesn’t want the Bigriverlanders to cut it all down for firewood or farmland. The whole wood is dying, and Teah must find a way to help Josh bring it back to life.

8)What was your favourite character name in the book and why?

I like the name, Dalff. I think it’s because Meah calls him two-effs from time to time. Dalff sounds like an old name that should belong in a faery tale or a fantasy story, but it also has that modern, trendy double-f on the end of it– you know, like a lot of new made-up names these days.

9)Give us a hint about the next book in the series.

In the next book (it might be called The Thinking) Meah gets to combine both the power of the thinking and the magical properties of her mother’s Book of Colours with some surprising results. The Biggo disappears and returns from time to time, Auntie Beryl makes a grand re-entry, the Firbog push forward with the greying, and Landland is in confusion. I introduce some elves, giants, trolls, and a few other things. Readers will find a lot more metafiction here as well. It’s all designed to work towards the master plan, but you might have to wait for the third book to find out who is really in control of the master plan.

10)Where can readers find out more about you?

You can find me at:

If you sign up on my website to The Biggo’s email newsletter about The Landland Chronicles, then the Biggo will send you a free poster map of Dead Wood. 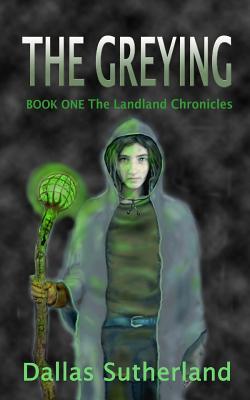 Thank you Dallas and Good Luck with the next book.