Today we have a review from Melissa. She blogs at http://mllegette.com/ 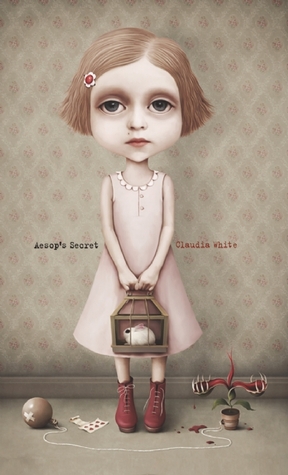 Let’s take a moment to talk about the cover. Just look at it. Adorable, creepy, simplistic — it grabbed me right from the get go. (Though cover Melinda and book Melinda look a good bit different, it still hooked me.)

Now let’s talk about the story. Cute, charming and fun. I love it when writers give their characters unique, quirky names and White did fabulous here. Melinda, Felix, Aesop, Stumpworthy — White clearly thinks the same as me. If you’re going to name a character, make it fun! I loved Melinda’s awkward transformations. Showing up for breakfast with rabbit ears — wonderful.

My only wish was that there was more depth to the story. It’s a short one — just a little over 100 pages. Nothing wrong with that. There have been many a book I’ve read that needed a major trim, but Aesop’s Secret needed expansion. I wanted more details. I wanted a fuller experience. I wanted more dialog. I wanted to get inside the characters’ skin. The story moved so quickly that I felt I was more skating over the surface rather than diving deep. For instance, I expected Melinda to explore and experiment with transforming into animals. Think about it. If you were ten (or really, any age) and suddenly realized you could become ANY animal what would you do? Try out a lion? Zebra? Alligator? Peacock? Heck, python? Melinda only tries to become a horse, a rabbit, a squirrel, a mouse, and a very large frog. So, to be fair, she does experiment. I just wanted something a bit more bold. There was so much potential to really have some crazy, outrageous fun. Why not rhino! Having said that, White has made the book a series, so it’s likely that the characters will continue to develop and there will be more opportunities for some fun animal transformations.

In conclusion, Aesop’s Secret is a fun read for both children and adults.