Today our guest is Mike Martin, author of yesterday’s book Beneath The Surface. Here is a link to the book review if you missed it. http://wp.me/p2Eu3u-5D1

Let’s find out more about Mike and his writing.

I was born in St. John’s, Newfoundland, on the eastern tip of Canada

I have been writing all of my life, but professionally for about 20 years. I have been a freelance writer, a ghost writer, an editor and a publisher. I have always written short stories but I started writing fiction about 5 years ago.

Beneath the surface is the 3rd book in the Sgt Windflower series are they all set in Newfoundland?

Tell us a bit about Sgt Windflower.

Windflower is a Cree descendant, tell us a bit about the history of the Cree in Newfoundland .

There are no Crees in Newfoundland, and apart from a few isolated bands of First Nations there are hardly any Aboriginal people in Newfoundland. There was a major First Nation called the Beothuks who were there when the first Europeans arrived, but they were driven off the land and disappeared.  In Beneath the Surface Windflower finds out a little bit about the Beothuks and what really happened to them.

If I came on holiday to Grand Bank I would be really excited to see a moose, how much of a problem on the roads are they?

Last year there were over 800 moose-vehicle accidents and there were a dozen fatalities. They are nice to see on the side of the road when you are driving slowly but they are a very real danger when travelling at night or in poor visibility.

Why were the Chinese visitors to the area not reported as being unusual?

They were seen as unusual but not in a bad way. That area is used to tourists and welcomes their attention and money. The other factor is that the southeast coast of Newfoundland has a long history of smuggling and in some communities the RCMP is not exactly seen as their friends or allies.

What was the strike at the fisheries about?

For centuries people fished off the coast in this part of the world and for most of that time there was plenty of fish for anybody who wanted it. But in the 1970’s and 80’s the fishing became so widespread by large factory ships and trawlers from all over the world that the main species, Atlantic cod, became near extinct. That resulted in a massive downsizing of the industry and a fight by everyone involved for what was left. The strike at the fish plant in Beneath the Surface was about a fight over who would get a share over what was left in this area.

Tell us briefly about the first 2 books in the series.

The Walker on the Cape. A dead man’s body is discovered along a well known but seldom used pathway in the hills above Grand Bank, Newfoundland. At first a heart attack or stroke is suspected but soon it is discovered that a main cause of this man’s death was arsenic poisoning. The case of discovering how this could happen in such a quiet small community is assigned to Sergeant Winston Windflower of the RCMP along with his trusted side-kick Eddie Tizzard.  Along the way Windflower also discovers two more things; a love of living in a small Newfoundland community that is completely different from his up-bringing in a Northern Alberta reserve and maybe the love of his life. He gets a taste of Newfoundland food and hospitality as well as a sense of how crime and corruption can linger beneath the surface or hide in the thick blanket of fog that sometimes creeps in from the nearby Atlantic Ocean.

The Body on the T is the second book in the Windflower mystery series. The story begins when a body washes up on a beach near Grand Bank, Newfoundland. There is no identification on the body and few clues to identify who the person was or where they came from. But this is just the beginning. There is also a devastating accident on the highway and another suspicious death to deal with. Throw in a rogue police officer and an international drug ring operating in the waters off the coast and Windflower’s peaceful world is turned upside down. Windflower also continues to enjoy the food and home-style hospitality of this part of the world. Cod tongues, pan seared scallops and even figgy duff become part of his diet, and his long list of favourite foods. Windflower may be a long way from his Cree home in Northern Alberta but he has found a new place to love in the fog and mist of Newfoundland.

10) Where can readers find out more about you and your writing? 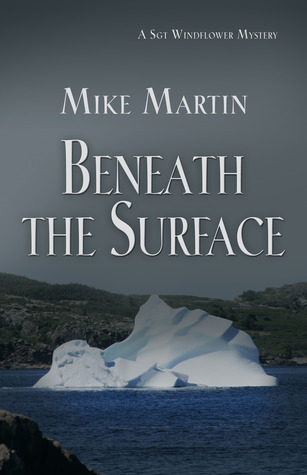