Today we have a book review from Fran. She blogs at http://disappearinginplainsight.com/

Fran chose to read  “A different Place to Die” by RR Gall. 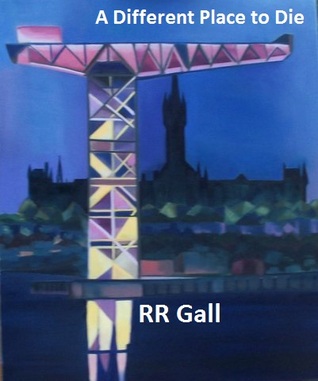 Quirky Glasgow Investigators in a Mystery that Twists and Turns

The first thing to hook me in R.R. Gall’s mystery/thriller, A Different Place to Die, was the characters. From the start, it is obvious Inspector Tom Quiss is struggling with his work. He thinks of just jacking his job in and taking up lawn bowling with dreams of playing on the Scottish National Team – even though he has never played on a team. The way he seeks escape makes him the type of character a reader can bond with.

The author’s descriptions of the man are fresh and catch the reader’s imagination. “Quiss has become slightly more handsome with age: his features finally gathering together after decades of gawky detachment. They have collected to bring a touch of distinction, a hint of appeal.” There is something so human about Tom Quiss

Next up is Shona Bally, a civilian investigator for the Glasgow police. The reader meets Shona as she goes through her daily makeup rituals. She is preparing to start a new job that will bring her into conflict with Inspector Quiss. Shona would never want to appear unfashionable and it is a stroke of writer’s genius to introduce the reader to her as she painstakingly deals with her appearance. One of Quiss’ ongoing observations of Shona has to do with her makeup. Whenever she blinks he imagines her eye lids like blinking semaphore flags sending out some mystery message.

The final character who will figure prominently in the mystery is Elspeth, Shona’s civilian investigator partner. We first see Elspeth through Shona’s eyes – a frumpy middle-aged woman dressed like she’s off to Church. Shona can’t help but think some makeup would help.

The novel is off and running and the reader is often given brief asides as to how the three main characters view one another. These asides serve to tell as much about the character in question as the one doing the assessing. Shona sees Quiss as teetering on the edge of casual and unkempt. She thinks, “Straighten up, man.” Those three words set the stage for all the interactions between Quiss and Shona. She pushes him continually to straighten up and do his job.

Elspeth’s take on Quiss is about the only thing she and Shona have in common. “She noted the crumples in his shirt – a match for his rumpled trousers – and wished he would see to his appearance. An image of him in his underwear came to her; an image of him standing beside her ironing board at the start of the morning, waiting for her to finish pressing his clothes. And she thought of the comb sitting in her handbag right now: wondering how he would react if she handed it to him one morning. A quick pull through would make all the difference.” Again, the author has masterfully foreshadowed just what makes Elspeth tick – she wants to be needed.

The second thing that hooked me was the actual mystery. This book is a page turner with a number of twists and turns that keep the reader guessing. When the actual motive for the bizarre string of murders is revealed, I freely admit, I never saw it coming. Enough is held back, and more than a few red herrings are tossed out along the way to make readers feel as though they are involved in the actual investigation.

R. Gall has managed to write a mystery/thriller that is both character and plot driven and one aspect never overshadows the other. Through snappy dialogue between the characters much is revealed about each without the author feeling the need to elaborate on their backstories. We see them as they are for the period of time it takes the novel to unwind and are left to speculate about the details of the rest of their lives. On a couple of occasions, I felt I had to speculate too much – Elspeth and her mystery husband’s fate really left me pondering. There were a few too many threads left dangling with the crime resolution for my liking. But hey, it’s not necessarily a bad thing for an author to leave a reader wondering.

Kudos to R.R. Gall for the ability to create characters with broad brush strokes who came alive to the point that the reader craves to know more. Double kudos for placing those characters in a mystery that kept the heat turned up page after page.