Today I bring you a review from Susan. She blogs at http://www.gardenofedenblog.com/ 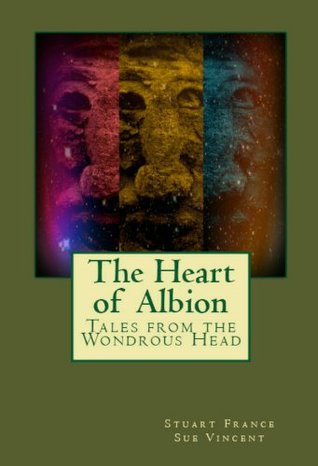 Extraordinary, in a word! ‘Unusual’ for another, and definitely original and thought provoking.
It begins with the fable of Jack and the Beanstalk which I was happy to revisit. I appreciated the psychological insight given by the two adventurers, Wen and Don as they discuss it. Fairy tales and fables, myths and legends contain hidden meanings and it is in this vein that their journey begins.
Wen and Don set off in the Silver Bullet (their car) with map in hand to find Albion somewhere in Devon; or so I was led to believe in the beginning. They are often in conversation making perceptive and imaginative leaps linking ancient tales with contemporary lives.
There is much play on words where e.g. the same word has two distinct meanings. ‘Cleave’ can mean as in ‘cling to’, or to ‘cleave in half’. From their discussions of words inter alia we’re led into magical tales in which the trials and tribulations of those in the tales are interwoven with their current journey. I enjoyed the many associations and amplifications on words and their deft dealing with the opposites, which are not exclusive to each other but are two sides of the same coin.
Poor Father Fish (who may pre-figure Arthur) becomes ill with longing for the maiden who appeared to him in a dream. In order to find her, he undergoes many impossible tasks. He faithfully fulfils them with friend and foe always accompanying him. Against all odds or, because of them, his mission is finally achieved. He has to search the whole of Albion for her. I was reminded of Psyche’s tasks set by Eros’ mother, also impossible tasks, but her love for Eros and her determination to be re-united with him, is the glue.
Many churches are visited, patterns are perceived dimly and the point is made that ‘… we think we see them, then maybe not – difficult, effort, which is why we avoid them’.
There are pearls interspersed throughout. I liked Don’s words: ‘if we struggle to see things that are staring us in the face in the present, how much more difficult it is to be accurate with the past and even with what we like to call our past’.
The authors paraphrase Heraclitus whose original words I believe were: ‘No man ever steps in the same river twice, for it’s not the same river and he’s not the same man’.
I’m glad they brought out that the word ‘silent’ contains the same letters as ‘listen’ and note that they say ‘listen in silence’ and not necessarily ‘listen to silence’.
I enjoyed travelling through Yorkshire and different parts of England, a land of such beauty and history, symbolism and legend. There are beautiful photographs interspersed throughout. The authors’ knowledge of myth and history made this an engaging and psychological tale, in spite of its sometimes steam of consciousness writing … or so it seemed to me .. with endless … as pauses.
I would give this a 4*.
Find a copy here from Amazon.co.uk or Amazon.com