She chose to read Legends of Windemere: Beginning of a Hero by Charles E Yallowitz 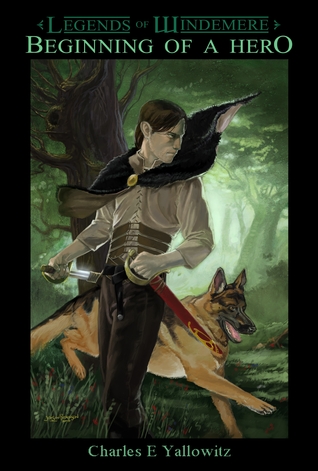 Young Luke Callindor, the forest-tracker, leaves the forest to enter into the Academy where he hopes to gain fame and glory in being a hero. His self-imposed task (gained by virtue of a mishap) is to find the would-be assassin of the Duke of Solomon’s heir. This unidentified heir is one of hundreds of students in the Academy whose wits and combat skills are being sharpened and trained under the stern leadership of headmistress, Ms. Selenia Hamilton.

The well protected Academy sits on the edge of the deadly Caster Swamp where the powerful Lich, the leader of the evil ones, resides and casts deadly spells. The HellFire Elf is charged with killing the Duke of Solomon’s heir.

Luke is an undercover agent. He enlists the help of friends in the Academy as he sets about his task. There is Nimby, the master of thieves, Aedyn the priest and Fritz who have wisdom, knowledge and magic as aides, and Luke himself has swords and courage. Fizzle is a tiny dragonfly who has strength and magic and collects and passes on information. Each is on an information-gathering covert mission to determine the heir and the heir’s would be assassin.

Luke, who is half-elf, is very human in his emotions as he struggles with dark forces and his desire to return home to Haven as a hero, like his ancestors before him.

Much of the story is told by way of conversations, interspersed here and there with graphic descriptions of battles whether undergoing martial arts training, or swordsmanship, or out in the deadly marshes against the foes. It is full of twists and turns, and of characters that I was unsure much of the time whether they were the good ones or the bad ones, which kept me reading on …

It is a rollicking tale, of the kind I do not ordinarily read. I enjoyed it though there were several typos which took away my enjoyment and I found irritating. e.g. ‘probably beast that you hear…’.