Today our guest is Kit Bakke, author of yesterday’s book “Dot to Dot”, here is a link to the post if you missed it. http://wp.me/p2Eu3u-4Lc 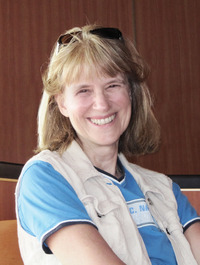 Let’s find out more about Kit and her writing.

I’ve been writing books for about fifteen years.

3) What was the key inspiring for this book?

DOT TO DOT started out very differently. At first Dot was an adult and her problems and challenges were quite unlike our Dot’s. That version was also written in the first person, not the third. So a lot changed. The part that stayed the same was the setting in England.

4) Before this edition of the book, you wrote it with 2 other main characters , who were they?

The adult Dot had a husband, whom she thought was being unfaithful but he actually wasn’t and they had two grown sons, one of whom needed a kidney transplant, and Dot had a best friend who was sometimes helpful and sometimes not. So you see it was a much more complicated story—in all honesty, it was more complicated than I could handle. I did a lot of interesting research on kidney transplants, though.

5) What research did you do to get the accuracy of the descriptions of Alton and Keswick particularly?

I spend as much time in England as I can. I love the countryside and I love London. I am a long-time Jane Austen fan, so have spent a couple of weeks in the Alton area, soaking up the atmosphere and visiting the sights. A few years ago, I walked the Coast-to-Coast footpath, so was introduced to the wonderful Lake District. Seeing all the Wordsworth and Coleridge-related places got me reading about them, and I realized that Dorothy Wordsworth was an important part of their lives, and, as usual, the woman doesn’t get the credit she deserves. So I tried to fix that. And as for Mary Wollstonecraft, how could a person not be drawn to her courage, her politics and her sad, sad death. And then to have her daughter grow up to run around with (and eventually marry) Shelley and write Frankenstein was such an incredible bonus.

Our heroine Dot finds a lot of resonance in Mary Shelley’s life, and in the Frankenstein story.

6) How did you find writing the English words and mannerisms?

Love it. I love finding the differences between English English and American English. I especially like the way the English use the word “keen” to mean “like” or “looking forward to.” And I love tea—I love the idea that tea solves problems.

7) Did Aunt Tab believe in life after death?

Good question. Sometimes she certainly seems to, like when she says “Thea, Thea, here you go, but you will never be gone,” or when she speaks directly to the ashes. But I guess I’ll leave the final answer up to the reader.

8) What was Nick’s surname?

I don’t think I had that figured out. What do you think? Probably something like Weston or Smithfield or Leigh or Scofield…( ooh a part of me wanted you to say “Shelley”, but it may have sounded too corny)

9) What year did you have in mind for the setting of the book?

10) What are you working on at the moment? Do you have an expected publication date for fans?

I’m working on a nonfiction book about the anti-Vietnam war protest movement in Seattle in the late 1960s and early 1970s. Some of my friends and I were very active in the anti-war demonstrations and such, and I want to tell that story to kids today. Don’t hold your breath, though; it’s probably at least a year or two away.

Thank you Kit, and Good Luck with the next book.